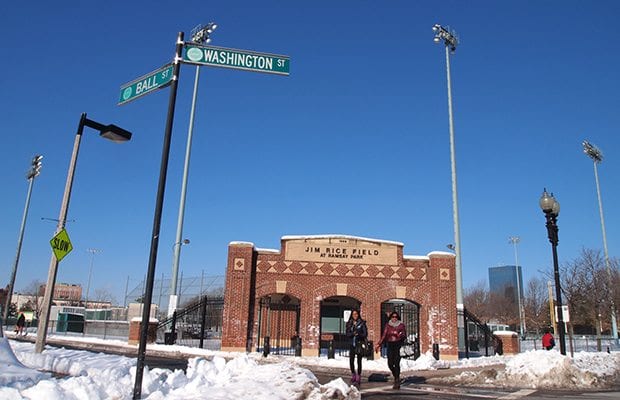 An 1800s granite marker, here under 10 inches of snow, delineates the historical boundary between Roxbury and Boston at the corner of Ball and Washington streets. In recent years, Massachusetts Avenue has been widely recognized as the boundary between the South End and Roxbury.

The racially driven cartography to determine black neighborhoods has added much confusion to the location of neighborhood borders, but Boston’s neighborhood boundaries have always been confusing, even to indigenous Bostonians.

Much of the confusion has to do with the manner in which the city’s neighborhoods were assembled.

In many ways, Roxbury’s history is a microcosm of Boston’s convoluted geographical history.

State Rep. Byron Rushing, president of the Roxbury Historical Society, says the only reliable boundaries for Roxbury are the political boundaries of the town that date back to its incorporation in 1630 and its separation from West Roxbury in 1851.

“There are lots of confusing things that happened since 1630, but generally those boundaries can be found today,” Rushing says.

In 1630, Roxbury was connected to Boston by a narrow spit of land running from the Dudley Burial ground to the Shawmut Peninsula. Rushing points to the corner of Ball and Washington streets, at the entrance to Ramsey Park.

“If you go out there, you can find the remnants of the marker that denoted the boundary,” he says. “Unfortunately, the top got knocked off and stolen sometime after the 1930s.”

Follow the Muddy River south to Jamaica Pond, then run along the current boundary between Boston and Brookline all the way to the Dedham Line and you have the western boundary.

The historical Roxbury included Mission Hill, Jamaica Plain, Roslindale and West Roxbury. It was separated from Dorchester by a brook which now runs in a culvert between Columbia Road and Blue Hill Avenue, and originally terminated in the South Bay near the Shirley Eustice House on Shirley Street.

Things got complicated when Roxbury began to urbanize in the mid-1800s, incorporating as a city in 1846. The more rural West Roxbury split off from Roxbury in 1851, taking with it the section of Jamaica Plain south of Atherton Street.

Things got even more complicated with the filling of the Back Bay, much of which was still claimed by Roxbury in the late 1840s.

“There was a huge fight,” notes Rushing.

The settlement dictated that the land southeast of where Massachusetts Avenue. meets the Charles River would remain as part of Roxbury. Run a line from the boundary marker by Ramsey Park to that point on the Charles, and it’s clear that Northeastern University, the Museum of Fine Arts and much of the Fenway sit well within the historical boundaries of Roxbury. The Longwood Medical area and Harvard’s Medical School and School of Public Health also sit in Roxbury.

But ever since Roxbury was incorporated into Boston in 1868, perceptions of the neighborhood’s boundaries have been in flux.

The Parker Hill section of Roxbury became dominated by Irish immigrants who began calling the area Mission Hill, after the Roman Catholic basilica that was built there.

As the black community expanded in Roxbury and the South End, blacks began calling the area southwest of Massachusetts Avenue Lower Roxbury, establishing a dividing line between the neighborhoods that persists to this day.

And when the U.S. Postal Service changed the name of the Grove Hall 02121 zip code to Dorchester, arbitrarily lumping the Roxbury neighborhood in with Four Corners and Bowdoin Street, it further confused popular notions of where Roxbury is.

Brigham Circle and the Fenway portions of Roxbury were lopped off with the designation of the 02115 zip code as Boston. Although Northeastern University President Joseph Aoun’s office is in the 02120 Roxbury Crossing zip code, the university uses the Boston address.