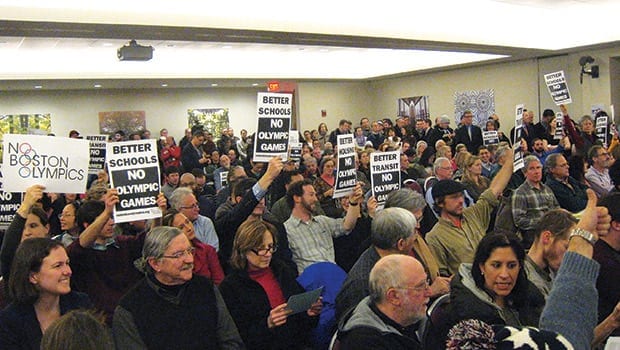 Some audience members held protest signs at a forum on Boston’s bid for the 2024 Olympic and Paralympic Games. The Feb. 5 event at Suffolk University Law School was the first of nine city-hosted public meetings over the next several months. Residents line up in a packed room at Suffolk University Law School last week to ask questions of Boston 2024 organizers and Mayor Walsh. The Feb. 5 event was the first of nine city-hosted public meetings over the next several months.

The organizers of Boston’s bid for the 2024 Summer Olympic and Paralympic Games, along with Mayor Martin Walsh, fielded questions last week from the public on funding, cleanup, potential venues, transportation, and most of all, a persistent sense that the process has not been open and inclusive of Boston residents.

Despite bitter cold, the meeting drew some 350 people who filled a lecture hall at Suffolk University Law School and spilled over into a second room to watch the meeting on a video feed.

A short program included a video created to inspire excitement and pride for a Boston Olympics. Paralympic medalist and two-time winner of the Boston Marathon wheelchair division Cheri Blauwet spoke of the transformative opportunities sports can bring and the heady experience of the Olympics for both athletes and visitors.

Architect David Manfredi of Boston 2024, the private group organizing the Olympic bid, discussed Boston’s potential to host the most walkable and transit-oriented Olympics ever, with most venues within a 10-minute walk from the T or commuter rail. Seventy percent of game venues could be on college campuses, requiring less new construction and less displacement. Creating athlete housing at UMass-Boston fits with plans the university already has to build student housing, and even the detailed “smart model” they are using to map the city will be a legacy tool for local planners to use, he said.

Franklin Park, if used for equestrian events and the modern pentathlon, would end up with an improved golf course and a renovated White Stadium that would provide an athletic facility for Boston Public Schools, Manfredi said.

“We’re not planning an Olympic Park,” he said. “We’re planning a city.”

While the audience listened quietly for the most part, there was audible hissing at an image of a large beach volleyball stadium imagined for the Boston Common.

Over and over, concerns were voiced in various ways about how the Games would be paid for and whether the city would be liable for cost overruns.

“The investment from the city of Boston on this, in terms of building venues, is zero dollars,” Walsh said, adding that the only public money would be for security, paid for by the federal government, and for infrastructure — which the city needs and would be building anyway.

The mayor said in addition to a $25 million insurance policy Boston 2024 has taken out against cost overruns, he would make sure any agreement he signs has language protecting the city of Boston from liability for overruns.

Another common theme was the perceived lack of transparency on the part of Boston 2024 and the Mayor’s office, an “anti-democratic process” and the feeling the Games are somehow a done deal being “shoved down our throats.”

Walsh spoke of the bid as an opportunity to gain unprecedented world attention on Boston and as a catalyst for economic growth and city improvements. He sought to assure the audience he would not lead the city astray.

“My top priority is to protect the taxpayers and residents of Boston,” he said. “If I feel something is wrong here, I am not going to support the bid. If I feel there’s a venue that doesn’t work, I’m going to make sure that doesn’t happen.”

A few people expressed enthusiasm for the games, but almost no one who approached the microphone did so without a concern to express.

A Beacon Hill resident decried the removal of ancient trees to make way for the volleyball stadium. A Harbor Point resident worried about clogged traffic arteries. Advocates for homeless people and people living with AIDS challenged organizers and the audience to ponder their moral priorities. Transit advocates asked for more Green Line tracks and a North-South commuter rail connection.

“If we need to plan, why don’t we just plan?” one man asked. “Why does it take the Olympics to plan?”

A South End resident asked simply, “What will it take to stop this? If we vote on it, and Boston says no, would that end it?”

Walsh stressed that the Olympics bid is “not a done deal by any stretch of the imagination,” with many discussions still to be held — but his short answer to the question was that it would depend on whether the referendum were binding or nonbinding.

City Councilor Josh Zakim last week filed an order for four nonbinding ballot questions to appear on the Nov. 3 Boston municipal election ballot. The questions would allow voters a yes or no vote on whether the city should host the Olympic Games, commit public money, cover cost overruns and use eminent domain to take private land for the event. And the Banner has previously reported on former gubernatorial candidate Evan Falchuk’s push for a statewide referendum on the games.

A Chinese-speaking man, through an interpreter, said the Olympics would bring huge employment opportunities — “but who actually gets the jobs?”

Nia K. Evans, chair of Economic Development and Labor and Industry for the Boston NAACP, asked about the diversity in structure and decision-making within Boston 2024’s staff.

“What steps are you taking to make sure to represent Boston’s cultural and economic diversity within your organization?” she asked, to applause.

Reached by phone after the meeting, Evans said Boston NAACP is reviewing documents and reaching out to community members before taking a formal position on the Olympics bid. In the meantime, the organization is working to bring Olympic organizers’ attention to Boston’s diverse populations.

“We do believe that representation in the decision-making process is important,” she said.

Evans expressed hope about the process, saying her group was scheduled to meet soon with Boston 2024’s community engagement liaison.

“It appears they are responsive,” she said. “We hope to work with them to make sure the process is as inclusive as possible, and that diverse impacts on diverse populations will be heavily considered.”

The Feb. 5 meeting was the first of a series of public meetings, with eight more scheduled in neighborhoods around Boston between now and the end of September.

For a complete meeting schedule and other information, see http://www.2024boston.org/process.