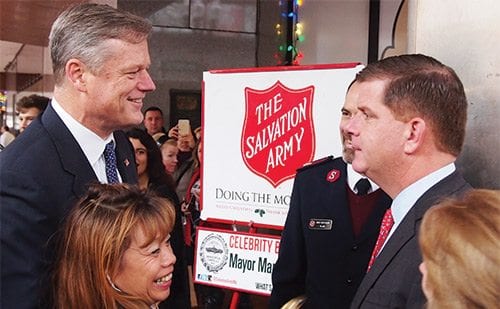 When Governor Charlie Baker released his budget earlier this year, he promised to “right size” government. Now, mid-way through the fiscal year, how far has he come with trimming costs, funding the commonwealth’s needs and his urban agenda, all while holding to his policy of not raising taxes?

Sitting down with the Banner last week, Baker said that there still is much to be done to balance the state’s next budget, but that work has been moving in the right direction.

“I expect this year will be difficult, but we have history of this with the folks who are involved and I think we’ll figure it out,” Baker said of the upcoming Fiscal Year 2017, where a $1 billion deficit is expected.

Meanwhile, some activists and officials suggest that Baker’s investment in areas like public transit and education do not go far enough.

Recently the spotlight has been on the MBTA as the agency considers how to meet looming deficits. Agency officials expect that — even assuming a 5 percent fare increase — there will be a shortfall of $242 million in operating budget and billions in repair costs.

Baker acknowledged the repair deficit is a concern, but said solving it is a gradual process and that notable steps forward have been made.

“We’re so far in the hole that it does affect safety, dependability [and] reliability,” he said. “The way you get at it is, you chip away at it one year after another. This is the first year in a decade or more that the MBTA will reduce the size of its state-of-good-repair backlog.”

Of the approximately one billion in capital investment dollars made at the MBTA this fiscal year, nearly $700 million is designated for repairs and maintenance, he said. Capital investments are put into infrastructure needs, while the T’s operating budget provides for expenses like employee wages and benefits.

As extra assistance, the state also put in $187 million of direct aid for operational improvements, an increase over $122.5 million in direct aid provided last year.

The exact size of repair deficit depends on how quickly it is handled. The MBTA would need $7 billion, assuming that full amount was given this year, according to Transportation for Massachusetts. If payment is divided over 25 years, the total amount, adjusted for inflation, would be $21 billion, the organizations says. Author: Joanne DeCaroEarlier this month, Baker joined MBTA officials in South Boston to provide an update on efforts to winter-ready the T. His administration invested $83.7 million into an MBTA winter resiliency plan.

The state achieved another key step in tackling MBTA funding, Baker said: bringing the agency’s operations into public view through the establishment of the MBTA Fiscal Management and Control Board to oversee management and spending.

“The MBTA was behind a curtain for a very long time,” Baker said. “We’ve created — for the first time in maybe forever — a truly transparent public conversation in respect to what’s going on in the T.”

The increase is not great enough to bring baseline school funding to the levels they should be within one year but may be on track to close the gap in four years, according to the recommendations of the Foundation Budget Review Commission. The FBRC is a panel charged with re-examining K-12 public education funding needs. It is chaired by Senator Sonia Chang-Diaz and represents business, education, governmental, civic and philanthropic sectors.

This October, the FBRC released a report comparing actual school needs to the formula for setting the minimum budget provided to them by the state and district. The team’s conclusion: Calculations heavily underestimate needs and the state and municipalities should invest millions more.

This school budget gap largely is due to booming health care costs. It also reflects an unrealistically low assessment of special education services demand. To close both these gaps in one go, nearly $431 million should be added to Chapter 70 aid in FY2016, the Commission said. An alternative: phase in the costs over four years, starting with increasing Chapter 70 aid by almost $96 million this fiscal year, the FBRC recommended.

Additional funds ought to be added on top of that to further support English language learners and low-income students, the Commission’s report stated.

The state’s school funding aid is tied to tax revenue, although tax rates are not something Baker intends to raise.

“We made a commitment when we were running that we would support an increase in general local aid [which includes Chapter 70] that would be equal to the growth in state tax revenue,” he said.

When asked about the proposed millionaires’ tax — a measure that would raise tax rates on incomes over $1 million and direct the estimated $1.5 billion in revenue into public education and transportation — Baker declined to speak specifically on it, but said that he is generally against to any tax increases.

“My general view is I don’t think we should be raising taxes,” he said.

Instead, his focus is to boost the economy by encouraging businesses in the state, something he seeks to achieve through reductions to taxes, energy costs and regulations. One focus in the next year, he said, will be growing hydro-power, natural gas, wind and solar use to combat the state’s energy dependence.

Hard but hopeful times ahead

In FY2017, the state may face an $800 million to $1 billion deficit, according to the Massachusetts Taxpayers Foundation. Massachusetts also has been covering budget gaps by dipping heavily into its rainy day fund and using money intended to replenish that fund.

Baker said reliance on one-time funding sources is declining and that overall, the situation is improving.

“The fact that we have a $1 billion deficit is challenging, but it’s coming on the heels of a deficit that was even bigger,” he said. “My expectation is we’ll find a way to figure it out.”

When Baker unveiled his FY2016 budget plans, the deficit was $1.8 billion.