Save Our Public Schools puts focus on canvassing

Youth, young adults turn out to knock on doors 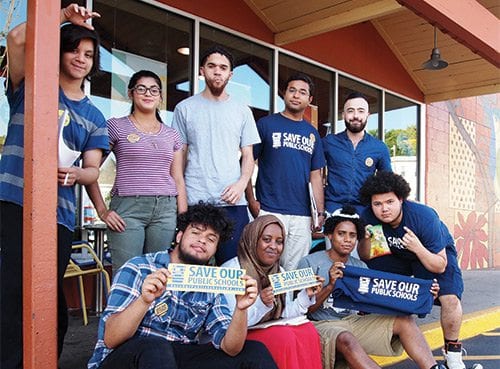 Facing a better-funded opposition, Save Our Public Schools members frequently cite door knocking and canvassing as the primary outreach method they hope will lead them to a ballot victory in November.

At 5 p.m. last Wednesday, SOPS’ local youth team gathered outside the Jamaica Plain Whole Foods Market, ready to hit the streets. The nearly dozen teenagers and young adults planned to spend the evening urging voters to reject Question 2, which would raise the cap on charter schools. The teens joked as they greeted each other, but when it came to talking the issues, they turned serious. Gabi Pereire, a rising junior at Excel High School, was among several who said her path to SOPS started with the BPS budget cuts.

Pereire said that for her, school cuts were the tip of the iceberg. When her younger brother was slated to lose the speech therapist who had worked with him for four years, she turned her eye to BPS’s funding.

“I realized the picture was much broader than budget cuts,” she said, saying she then learned the role charter school funding plays in BPS’s resource struggles.

The door-knocker brigade partnered up, where possible including a Spanish-speaker in each pair, and took a list of registered voters. For Pereire and Muhammad Rehan, a campaign intern and University of Massachusetts political science and economics major, the goal was to hit 66 doors.

The foremost message the canvassers put forth: Under the current school funding system, an expansion of charter schools results in a depletion of resources to district schools. But, they are careful to say, they do not oppose charter schools — they are concerned about the funding impact of a charter cap raise.

“There are a lot of misconceptions,” Rehan said. “A lot of people think we’re against charters, but we’re not. We’re against raising the cap.”

The assumption that they oppose charter schools can make some people initially resistant, he said.

“Allocations of BPS funding is wonky,” Erik Loca, a rising junior at Snowden International School, said before setting out to contact his own list of voters. Raising the cap would “[create] a bigger burden on what’s already a messed-up system.”

Canvassers distributed fact sheets and, at houses where no one answered, hung information sheets on doorknobs that highlight several additional talking points. Among them: Some charter schools use repeated suspensions to push out certain students; the state in some cases has approved charter school establishment despite community objection; and district schools are losing resources due to charter funding, while typically serving more English language learners and special needs students.

SOPS’ Boston-area youth door-knocking team comprises eight to 14 members on a given day, approximately half of whom are volunteers, said Carlos Rojas Alvarez, SOPS’ statewide student coordinator. Others, like Laco, receive a stipend for their work. A SOPS spokesperson declined to reveal the amount of the compensation at this point.

Many of the teens out last Wednesday said they came to SOPS through their participation with Boston Student Advisory Council, Boston Youth Organizing Project and/or organizing the mass high school student walkout last spring in protest of the anticipated BPS budget shortfall.

For Laco, word of his school’s budget reduction and the resulting class and staffing cutbacks spurred him to education activism.

“I wanted to find a way to speak my voice and change what’s going on,” Laco said.

He joined the Boston Education Justice Alliance and its Boston Youth Organizing Project, and learned of the SOPS campaign when it gave a presentation to BEJA members.

Rojas Alvarez said the campaign is actively working to expand its youth membership, including through working with youth organizations in cities such as Lawrence, Worcester and Springfield. SOPS also collaborates with community, social justice, youth and parent groups such as the NAACP, Massachusetts Education Justice Alliance, Progressive Democrats, Jobs with Justice and Citizens for Public Schools, SOPS spokesperson Jannae Knospe said.

Knospe said the campaign has canvassed in every major city and many towns across Massachusetts, although she did not provide a specific number.

Pereire and Rehan jotted notes about their experience at each house, marking if the door was answered and whether the person supported a “No” vote on Question 2, favored the other side of the issue or was undecided. At houses where no one answered, they left door-hangers, and they said that on the weekend, they would call these missed houses for another shot at a conversation.

Rehan started doorknocking at the beginning of June and thus far has visited Brighton, JP and Roxbury. Most of the people he encounters are supportive, undecided or unaware of the issue, he said.

Those advocating for a cap lift also cite direct voter engagement as a critical piece of their outreach. The Great Schools Massachusetts campaign, which advocates for a “Yes” vote on Question 2, has opened offices in Roxbury, Brockton and Lowell, with plans for further offices including in Worcester and Springfield.

Parents, educators and charter school alumni participate in the doorknocking sessions, Eileen O’Conner, GSM spokesperson, told the Banner in a statement, and the campaign is increasing the canvassing effort.

“We’ve already begun this effort by knocking on almost 10,000 doors in the past two weeks,” O’Connor said last Thursday, “and we will have a strong team of more than 17 organizers working in field offices from Roxbury to Springfield and everywhere in between.”