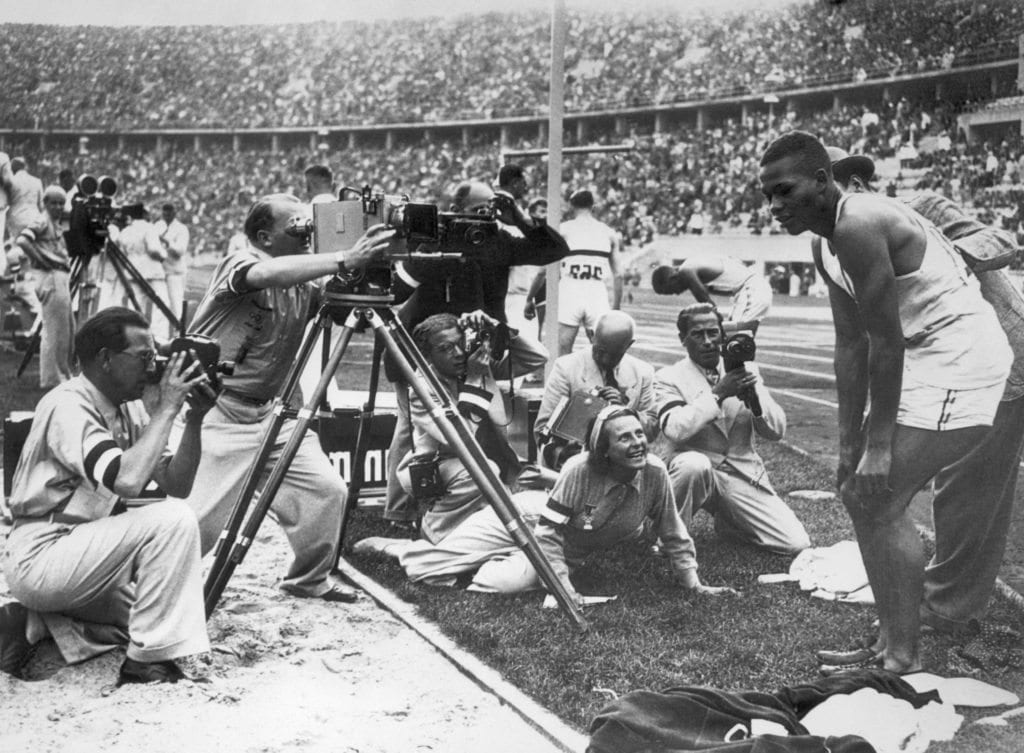 Named earlier this year by Variety magazine as one of their “Top 10 Documakers to Watch,” Deborah Riley Draper is driven by passion to tell the stories of the numerous unsung African American trailblazers and heroes whose achievements and lives have been either ignored or buried in our collective history. Narrated by Blair Underwood, “Olympic Pride, American Prejudice,” tells the story of the 17 other African American athletes who competed on the U.S. Team (in addition to Jesse Owens) at the 1936 Summer Olympics in Berlin, Germany, and their unheralded achievements.

Riley Draper spoke with the Banner about what inspired her to tell their story in “Olympic Pride, American Prejudice,” how Blair Underwood became involved in the project, and what she hopes audiences take away from seeing the film.

It’s well-documented that Jesse Owens made history at the 1936 Olympics in Berlin. But what was unknown was the story of the 17 other black athletes who also competed in the Olympics with Owens. How did the accomplishments and the impact of the other athletes get lost and what made you want to tell their story?

DRD: I got there in a non-linear path. I was actually researching Valaida Snow, who was a trumpet player, who was interned in Nazi Germany and her story led me to the story of these 18 African American athletes. And then researching, I was actually quite astounded because I didn’t know there were 18 African American athletes on that team. My whole life I thought it was just Jesse Owens and it had has always been positioned in that way that he was the singular hero that took on Hitler and won four gold medals. And Jesse Owens was an incredible athlete and an incredible hero, but there were also 17 other incredible athletes and 17 other incredible heroes. It speaks to how, we in America, process African American history. We like to make it there’s only one, or you can have just one. Whereas it was very easy for an American propaganda perspective to say ‘there was a singular African American hero who beat the Aryan’ and that’s great wartime propaganda because if the Negro can beat the Aryan certainly our troops can march in there and beat those Germans.

But to actually say, on that team there were 18 stellar high school and college athletes, many of whom had 4.0 GPAs, majoring in mechanical engineering and chemistry, and able to speak German and fly planes, and they collectively won eight gold medals — and silver medals and bronze medals — and they all represented America with grace. That’s a tough thing to sell when you need to uphold the institutionalized racism and barriers of Jim Crow. You can’t do both. You can’t sing the praises of a ton of black kids who were in college and maintain that they’re second class citizens and inferior, right? That’s a bit of a conundrum, so it’s much easier to talk about one and let the others kind of fade into obscurity.

DRD: You know what has been interesting? It’s personal. The storytelling is about people’s lives, real lives; the people who have contributed to world history, American history, African American history, and the work that these heroes did. They impact me right now. I wouldn’t actually be on this phone with you, if it wasn’t for them. Not just because I’m telling their story but because what they did in the fight for equality and the struggle for civil and human rights. I’m driven by passion to understand my own cultural inheritance and the passion to tell the stories of the people who made a difference and have been ignored. They’ve been marginalized and their voices and their stories have been silenced. I’ve learned about myself that that brings me tremendous joy and I take great pride and I’m honored to be able to bring these stories to life. And that’s the difference. And in the course of doing that I’ve met some incredible people who have been inspired and motivated about having heart and having perseverance. How did Blair Underwood become involved in narrating the project?

DRD: Blair Underwood is one great human being. We asked him and he said yes after he saw the trailer. It was that simple and that easy. He was stunned as a student of African American history, and he is a great student of history, that he did not know the story because he takes great pride. He played Jackie Robinson. He understands the importance and he spends a lot of time with his kids helping them understand the importance. He didn’t even know that Mack Robinson was on the team and Mack Robinson was Jackie Robinson’s brother. When he saw the trailer he understood the thesis of the film. He said “yes” right away. He called back himself and said “yes.”

The film screened earlier this year at the DuSable Museum of African American History in Chicago in conjunction with the Illinois Holocaust Museum and Education Center. How did that collaboration come about?

DRD: With my first film “Versailles ‘73” we screened at the DuSable Museum, and so when the DuSable heard about the second film they immediately wanted to bring it that February. We’re like “we’re not finished with the film” and they’re like “we will take a work-in-progress screening but we want to do is actually have a cross-cultural interchange with the Holocaust Museum,” and I said “absolutely.” As a result, the Ohio Holocaust Museum heard about it so we ended up doing one in Cincinnati with the National Freedom Center and the Ohio Holocaust Museum, because there is a long-standing relationship between Jewish Americans and African Americans. And that relationship ebbs and flows throughout our history. There’s some times where we’re really in sync and then there’s some times when we’re not as in sync, and it was really important to revisit those moments, and particularly that moment in 1936 that both Jewish Americans and African Americans had very distinct roles and perspectives on that American team.

What do you hope audiences take away from seeing “Olympic Pride?”

DRD: We hope people understand that there is greater commonality among us than there’s difference. So we should really to start to explore the commonalities as opposed to always focusing on the difference. In that we really need to look at this period in 1936 because every possible bias that could exist was existing; and we know what happened from 1936 to 1946. We know what the war looked like. We know what Germany became at that time. We have to understand where we are in this country and look at the clues and figure out if we’re really understanding our history, so that we can move forward, or will we be doomed to repeat it?

You’ve covered fashion with “Versailles ’73” and now you’re covering sports and the Olympics specifically in this film. What’s next for you?

“Olympic Pride, American Prejudice” screens at the Martha’s Vineyard African American Film Festival this Saturday, August 13. For more information on the film festival and to purchase tickets to the screening, visit www.mvaaff.com.