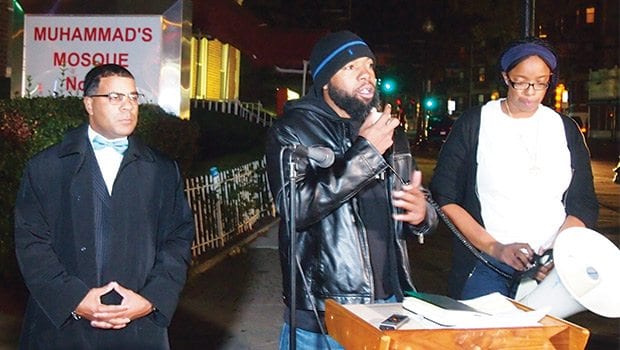 When a 41-year-old man was shot and fatally wounded on Dorchester Avenue Oct. 18, the news of his killing was eclipsed by that of the shooting five days earlier of two Boston police officers in East Boston. The officers survived, the Prudential building was lit blue in homage and the city took note.

Meanwhile, the family of the Dorchester shooting victim worried about eviction.

“The Section 8 voucher was in his name,” said youth worker Monica Cannon.

Cannon and other anti-violence activists are seeking more resources to deal with what they see as a dangerous increase in the rate of violent crimes in Roxbury, Dorchester and Mattapan. Monday, the activists gathered in Grove Hall in front of Muhammad’s Mosque No 11 to discuss the need for more services and greater community involvement in violence prevention.

“When a sister calls me, it is my job to stand with her,” said former state Rep. Carlos Henriquez, who thanked Cannon for convening the group.

Henriquez told the Banner that the city has an urgent need for better trauma response services in schools, where children who are affected by violence and murder are often in need.

“We need better trauma response, particularly in the wake of a shooting,” he said.

Henrquez said he and other organizers will also seek continued funding for the city’s street workers program, through which adults help de-escalate violence and find help for youths who commit violence or are victims of violence.

Cannon said the activists are calling on city councilors to meet with community residents to discuss ways to stem the increase in violent crime. She said the group would first seek a meeting with District 4 Councilor Andrea Campbell, who heads the Criminal Justice Committee, then seek a broader meeting with citywide councilors and councilors whose districts include areas affected by violence.

At-large Councilor Ayanna Pressley, who attended the Monday night meeting, said she is working with her colleagues in City Hall on strategies to reduce violence and provide services for those affected by it.

Pressley said she and her colleague, At-large Councilor Anissa Essaibi George, are working to get social workers and nurses placed in every Boston public school. She also said the Boston Police Department could use more trained social workers to help de-escalate situations with people who have mental disabilities.

“I’m here in solidarity,” she said. “My job is to thoughtfully respond with policy.”

“We pick a particular neighborhood and occupy it and reach out to people to be peace keepers,” he said.