Each year the Environmental Working Group publishes a list of “dirty dozen” produce that is conventionally grown rather than organic. The EWG is a Washington, D.C-based non-profit organization whose function it is to protect human health and the environment.

Strawberries have once again made the top of the Dirty Dozen list, and spinach has now climbed to second place. This dubious distinction means that these two products have more pesticide residue than any other fruit or veggie. According to the EWG, 70 percent of samples of 48 types of conventional produce were contaminated with the residue of one or more pesticides. What’s worse is the pesticides remained even after being washed. In some cases, peeling the fruit did not eradicate them.

The U.S. Environmental Protection Agency contends that the chemicals used to protect foods from pests are safe even when ingested. Dr. Philip Landrigan of the Mount Sinai School of Medicine disagrees. Landrigan was the force behind removing lead from gasoline and paint, largely because of its effect on children’s health and development. He contends that even low levels of pesticide exposure can be harmful, particularly to infants and young children.

There is no hard evidence that organic foods are more nutritious than conventionally grown foods. A medium-sized peach, regardless of how it is grown, contains roughly three grams of dietary fiber and 285 milligrams of potassium. But some people feel more comfortable ingesting foods less imbued with chemicals.

According to the EWG, nearly all samples of strawberries, spinach, peaches, nectarines, cherries and apples tested positive for at least one pesticide. Strawberries proved to be the most contaminated with 20 different pesticides. Spinach samples averaged twice as many pesticide residue by weight than any other crop. In addition, the analysis determined that three-fourths of spinach samples contained the residue of a pesticide banned in Europe for use on food crops.

Not all produce fared so poorly. The EWG has established the Clean Fifteen™ list of fruits and veggies least likely to contain pesticide residue. Examples are sweet corn, avocados and cabbage.

Organic food is expensive and beyond the purse strings of many people. Yet, no one relishes ingesting a heavy dose of chemicals with their fruit. It may be better to pick and choose. For example, purchase the organic strawberries, but substitute asparagus ─ a cleaner veggie ─ for spinach.

Below are both lists ─ the Dirty Dozen and the Clean Fifteen. The choice is yours. 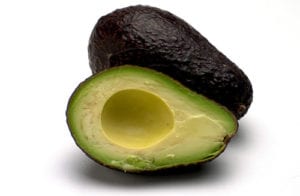