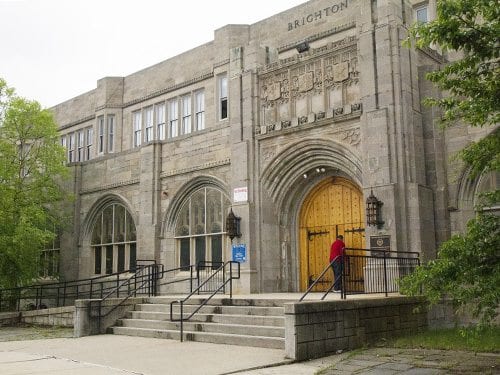 Brighton High School slipped into turnaround status in February, and, like many schools in the same position, informed all staff save for custodians and cafeteria workers that they would have no guarantee of employment in the following year. They would have to reapply to their jobs if they wanted to remain. Ultimately, many educators, including high rated ones and nearly all teachers of color, were not rehired at Brighton. The logic behind the “excessing” of staff may be to free a school to release any teachers seen as contributing to the school’s downgraded status or to replace teachers performing at an adequate level with teachers seen as able to go above and beyond. However, some teachers say that the practice is not always used to students’ advantage. For one, excessing teachers who receive top marks on teacher evaluations puts the school at risk of losing its best teachers.

Martha Boisselle is an award- winning teacher and among those told to reapply to her job at Brighton. Though she wanted to stay, the uncertainty of employment prompted her to send resumes elsewhere. Boisselle received her pink slip from Brighton the day before she received the Boston Municipal Research Bureau’s prestigious Shattuck Public Service award in 2016, and she also was one of six finalists for the 2017 Massachusetts Teacher of the Year Award.

While in the end she did sign on to return next year, many qualified teachers did not, she said. Some of those educators took jobs outside of the Boston Public Schools district entirely.

“We have national board-certified teachers at this school. Four Boston Educators of the Year. The math teacher of the year,” Boisselle told the Banner. “We have so many really strong teachers in this school. All of them were excessed. Many of them are not coming back next year. … We’ve lost a lot of talented teachers.”

Mass excessing is not required for schools that reach Level 4, but is common. BPS Superintendent Tommy Chang said in a February school committee meeting that excessing has been implemented at all BPS Level 4 schools to date. The school superintendent has the authority to ask all staff to reapply for jobs, and then the principal and a school site subcommittee comprised of stakeholders such as parents and teachers’ union members decides who is rehired, said BPS spokesperson Dan O’Brien.

In some ways, the practice of requiring teachers to reapply also is encouraged on a higher level. Schools entering turnaround may apply for any of four types of federally-funded School Redesign Grants if they comply with certain requirements. One SRG type requires, among other steps, that the applicant school dismiss its principal and rehire no more than 50 percent of existing staff. A second SRG model does not require excessing, but rather implementation of evaluation systems and removal of any teachers who prove ineffective despite after having been offered sufficient opportunities to improve.

O’Brien said that the philosophy is that a turnaround school needs rapid improvement and “excessing staff allows the district to consider applicants from inside the school, inside the district, and outside the district for each position and to select the best-qualified candidate to serve in every role.”

Teachers are not the whole picture in a turnaround. The Local Stakeholder Group for Brighton High includes among its members teachers, a student, a parent, a member of the state Department of Elementary and Secondary Education and of the Boston School Committee, as well as representatives from the city government, local hospitals, higher education and Boston Private Industry Council. The group reviewed data, gathered feedback from stakeholders and developed turnaround plan recommendations, which they outlined in a letter to Chang last year. They recommended the federal model that calls for replacing the principal, but not necessarily replacing teachers, and implementing strong evaluation systems, stating that “This model will allow BHS to evaluate and build on strengths of the existing faculty and maintain a faculty with appropriate ESL [English as a Second Language] licensure and SEI [sheltered English immersion] endorsement.”

The stakeholder group stated in the letter that increases in the intensity of students’ needs, coupled with decreasing funding due to lower overall enrollment, had created budget strain. In school year 2014-2015, Brighton High enrolled 989 students of whom about 88 percent of students were low-income, 20 percent special education and 39.7 percent English Language Learners.

The local stakeholder group recommended an array of changes. These included enhanced professional development and improved teacher-student relationships, as well as a variety of supply and student support improvements, such as better access to computers, increasing family engagement, adding psychologists and social worker staff and providing the school with more resources.

A teacher may be excessed due to turnaround status or other causes such as school closure or the elimination of the program or class they teach. When this happens and the educator is not rehired, newer “provisional” teachers simply do not have their contract renewed and become unemployed. Tenured teachers who are not rehired are kept on the BPS payroll. If these teachers cannot find placement at a different school, they may be assigned to substitute teaching or other work.

“Imagine receiving 30 years worth of proficient-exemplary evaluations [the highest possible], but then not getting placed in a school. Where you have expertise in working with students with trauma and then are being asked to file papers all day,” Jessica Tang, Boston Teachers Union organizing director, said during a city council hearing. “This is a real story, real teacher.”

Handling of excessed teachers is a sticking point in the contract negotiations between the BTU and the city. According to a BTU press release, the school department proposes providing excessed teachers with one year of full pay, after which their wages would be reduced to the level of a substitute or paraprofessional. If the excessed educator does not receive a teaching position selection within one or two years, they would be terminated. Under existing law, there does not appear to be a time limit for retaining tenured teachers who are without permanent positions and providing them with their current salaries. These teachers are placed in non-permanent position within the areas they are licensed for, according to O’Brien.

Tang suggested that BPS may be willing to risk losing highly-ranked teachers because it does not necessarily want them back. She charged that BPS often uses excessing not to remove sub-par or misaligned teachers, but rather to shed seasoned educators who come with higher paychecks

“This is not about bad teachers wasting district funds, this is about discriminating against ‘proficient’ and ‘exemplary’ teachers because it is cheaper to hire a new teacher,” Tang said. “This practice flies against research which shows that high needs students need experienced teachers. …The district created this mess in order to save funds.”

O’Brien says this is not the case, although the budgets for BPS’s turnaround schools are not expansive enough to support an above-average concentration of teachers at the higher end of the pay scale.

“The number one priority is to hire teachers who will best serve the needs of the students in their given schools,” he said in statement. “These two schools [Brighton and Excel] are budgeting for new teachers based on ‘average salaries,’ which means they are including teachers at the higher and lower ends of the salary scale. BPS is not engaging in a practice of excessing teachers for cost reasons.”

Several of the black educators said they believed the school suffered from many staff members who were not culturally competent or aware of how to connect with students and respond to incidents of trauma. Some said the in-group teachers at the school had been there for too long and had not refreshed their skills or kept up with changes in the student population, and so were disconnected.

Several of the black educators said they saw potential for a turnaround staff change to bring real reform, should those who were entrenched be removed and a truly independent headmaster with no prior ties to the school be introduced.

Only one teacher who identifies as black was rehired, the teacher said. Meanwhile, according to BPS data, the student population was 48.5 percent black during 2014-2015. The teacher said that several provisional black teachers will have contracts expire at the end of June. In other cases, she said, black staff members’ positions were not reposted. Another teacher said that after she realized the in-group would remain in influence, she withdrew her application, disillusioned that there would be real change.

Who wants to work at a turnaround?

Boisselle said a member of the school’s hiring committee told her that some strong candidates have declined offers to work at Brighton due to its turnaround status. She believes there is a stigma against teachers with a turnaround school on their resume.

Additionally, working at a turnaround can be grueling, Boisselle said. Teachers must take on many extra hours and are in landed in a work environment where most of the staff is new, meaning there is no clear culture and everyone is still learning to adjust.