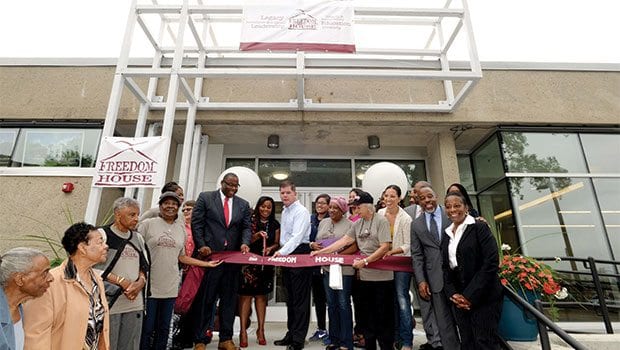 In 2013, the building occupied by the Grove Hall social service agency Freedom House was fast becoming uninhabitable. Energy costs were sky-high, there was water damage, costly repairs were needed and the layout of what served as a yeshiva in the mid-20th century was not conducive to the needs of a contemporary youth-oriented organization. That’s why Freedom House moved across the street into the former Grove Hall Library building, an 8,000-square-foot concrete and glass building with an open floor plan. But that building, too, needed work to transform it into a facility that meets agency needs, serving 2,000 students on-site and in local schools. Renovations began in 2015.

Two years and $2.5 million later, the new Freedom House recently held its formal ribbon-cutting ceremony, with elected officials, community members and the students and staff who are in Freedom House on a daily basis.

Mayor Martin Walsh said the new building will help ensure that Freedom House will continue to serve its mission.

“Freedom House is an invaluable resource for students and families in this neighborhood,” Walsh said. “The transformation of this city-owned property into a dynamic, state-of-the-art space for youth is cause for great celebration.”

Freedom House Executive Director Katrina Shaw, who has overseen the organization through the redevelopment process, said the new design allows the agency more flexibility in how it uses its space.

“We always want this space to be open to the community,” she said. “We can close one side for offices and open up the other side for meetings.”

The evolving mission of Freedom House guided the transformation of its physical setting. Architect Troy Depeiza, co-founder of DREAM Collaborative, said the renovations were designed to maintain the light and openness of the building’s original open configuration, while creating partitions that enable multiple activities.

“It still has a sense of openness so the occupants can still see light coming in,” he said.

The most noticeable building change is a floor-to-ceiling glass wall facing Warren Street.

“The whole idea is to open up that view, not just from the inside, but from the outside, so that folks coming by can see that this is a hub of activity in the community,” Depeiza said.

The window fronts one of three classrooms on the Warren Street side of the building that can be adjusted in size by two removable walls. The space also can serve as a large community meeting room.

New to the building is a kitchen, open offices for employees and walled-off offices for senior staff. The building’s white and silver palate, defined by the cement, steel and glass used extensively throughout the interior, is warmed by lighting and 9 feet tall wooden doors.

“We tried to maintain the original feeling of the place,” Depeiza said.

Shaw said the students who have been attending after-school programming since May have responded favorably to the new build-out.

“They love it,” she commented. “They like the openness, the fact that you can see around the building, the transparency.”