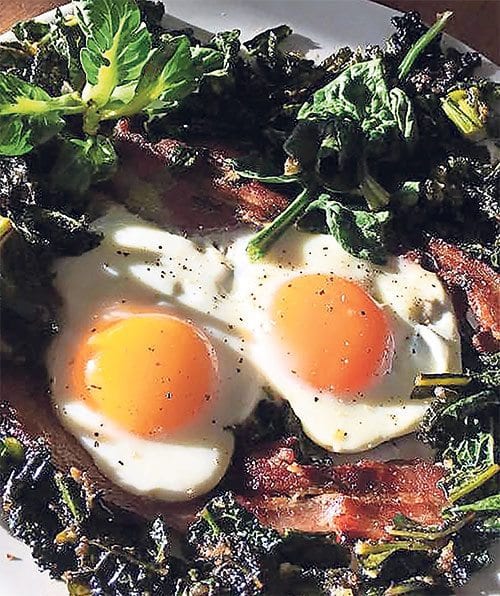 Eggs in a Forest is a ketogenic dish that anyone will like, even carboholics. It’s basically eggs and bacon, plus fibrous green veggies. (Photo: Ari Levaux)

After a lifetime of making dietary choices by gut instinct, I recently embarked on my first real diet.

I’m gunning for my visceral belly fat, the insidious deposits that lurk between your internal organs — or sometimes in them or on them — far beneath the abdominal wall. It’s the fat you can’t squeeze, no matter how wide your pinch.

This is activist fat; as the visceral deposits build, they begin to act like their own internal organs, even releasing hormones, some of which have been tied to inflammation and disease. I began laying down my visceral deposits decades ago in high school, when I discovered I had a talent for eating.

The ketogenic diet used to be nicknamed the “starvation diet,” when it was the only known cure for certain neurological diseases. In fairness, it only feels like you’re starving, but the deprivation is real: deprivation of carbohydrates.

Ketogenic means “ketone producing.” Ketones are breakdown products of fat. Thus, when your body is producing ketones, that means fat is being broken down. The cells of the body can use these ketones to make energy, similar to how they can use sugar for energy. The idea behind the ketone diet is that your body is reluctant to burn that fat and produce those ketones as long as there is sugar circulating in the blood. The only way to remove sugar from the blood is to remove carbohydrates from the diet. Only then will the body make a metabolic shift into ketosis, and begin burning ketones for energy. Switching your body from sugar-burning to ketone-burning is analogous to switching your truck from unleaded gas to diesel, but quite a bit easier.

Ultimately, weight gain or loss is a result of the balance between how many calories you consume and how many you burn. Many diet and exercise routines can achieve those goals. Success at losing body fat will ultimately come down to finding a diet and exercise routine you can actually stick to in the long run — preferably one you enjoy, so it doesn’t feel like work. The diet you choose can be low-carb, high-carb and even carb-agnostic.

Ketosis called to me because I enjoy fat more than sugar anyway, so I was already halfway there. I already live on bacon and eggs, practically, so why not cut the candy and go for it?

In the first week I actually gained four pounds, as I compensated for my deprivations with more fat than I needed. Since fat is so dense, a day’s worth of calories doesn’t always take up a lot of space, and can leave your belly growling again in no time. To a certain extent, you will probably have to get used to a little growling in your tummy if your goal is for it to shrink. Those hunger pangs could also be reclassified as belly-shrinking pangs. Or body-switching-to-ketosis pangs. In any case, they felt a lot better than being bloated with acid indigestion, and other symptoms of overeating. I came to associate that feeling in my belly with shrinking visceral fat, and how my belly now curves inward when I bend over, instead of outward. These are good things.

Meanwhile, I’ve been adding more and more fiber to my ketogenic diet, which is good for a range of issues, including making me feel a lot more full.

Fiber is a catch-all term for any carbohydrate that we can’t digest. And like other carbs, fiber has a way of filling the belly. Unfortunately, lots of high-fiber foods — including many fruits and veggies — also contain sugar and digestible carbohydrates. Finding enough fiber to include in one’s ketogenic diet, then, becomes helpful in sticking to the diet.

Leafy greens like spinach, kale, mustard and chicory, as well as lettuce and other leaves, are a great source of belly-filling fiber. Tossing the leaves in a succulent dressing is a great meal. You would have to eat a lot of leaves to fill up on salad, but then, eating a lot of leaves might be a really good idea.

For something a bit heavier, here is a recipe for Eggs in a Forest that anyone will like, even carboholics. It’s basically eggs and bacon, plus fibrous green veggies: cauliflower, broccoli, greens and Brussels sprouts are all good choices. This recipe is great with scrambled eggs, but for the sake of the photo I’m using sunny-side-up eggs.

Get the bacon going, chopped or in strips, with some olive oil and/or butter on low/medium. Add the toughest leaves, like kale. When tough greens and bacon are nearly done, stir in some chopped garlic, and crack an egg or two on top of the tangled business.

When the egg is nearly done to your liking, smother the pan with tender greens, like spinach or tat-soi, and put a lid on briefly to wilt the greens and cook the top of the eggs. Sprinkle with salt or soy sauce and pepper, and serve with the hot pepper of your choice. Eat until full.