Advocacy group opens up Boston Harbor for all On Monday, August 27, Boston Harbor Now will host the Mattapan Community Cruise, a free harbor cruise for all Mattapan residents. The community cruise initiative is just one of several ways Boston Harbor Now is working to make the harbor and its programming more accessible. 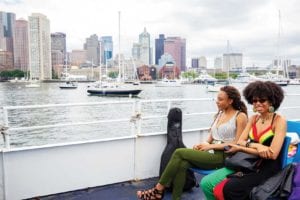 The community cruises offer food, music, intergenerational storytelling and an opportunity for residents to explore the aquatic side of the city. Kathy Abbott, president and CEO of Boston Harbor Now, says, “Our hope is that everyone who comes in contact with the harbor falls in love with it. Last year on the Chinatown cruise, the little kids were just awestruck to see the planes landing at Logan. We want every child to feel that way.” An RSVP link for the Mattapan cruise will be available one month before the cruise on the Boston Harbor Now website.

Throughout the year, Boston Harbor Now organizes and hosts 450 free programs on the Boston Harbor Islands, including Saturday morning yoga, art lessons, history tours and overnight camping. To ease the cost of the ferry, Boston Harbor Now has partnered with the Boston Public Library to offer two-for-one ferry passes at every library branch. There are also special holidays, like the islands’ opening day in May, when ferries are free.

Not all of the activities on the harbor require a ferry out to islands. Of the 47 miles of coastline along the harbor, 40 are open to the public. The newly launched Boston Harborwalk web tool shows an easy-to-read map of which parts of the Harborwalk you can access and from where. It also identities which neighborhoods touch the harbor and what amenities are available, such as restrooms, kayak launches, Wi-Fi or observation decks.

Abbott says years of sanitation issues tainted the harbor’s reputation, and Bostonians are still learning all that the area has to offer now. “It was so dirty for so long, I think we all turned our backs on it,” she says. “Our topography is relatively flat, so unless you live on the water, you’re not seeing the harbor.” According to Abbott, the revitalized harbor now serves as a public health asset, supporting emotional and mental health in its soothing beauty and physical health through the many active programs, like the annual Spectacle Island 5K run.

But most of all, Abbott hopes that the community members visiting the waterfront will understand that the harbor is a part of their city. “We think of the harbor as a resource for all of greater Boston,” says Abbott. “It belongs to everyone.” Arts & Culture
Handel and Haydn Society presents Composer Jonathan Woody world premiere
April 15th, 2021 >
GET THE
NEWS THAT YOU
CARE ABOUT
Members get access to a personalized news feed,
our newsletter and exclusive discounts on everything,
from shows to local restaurants — all for free!