Freedmen’s Bureau Collection to be open to the public, housed in downtown Boston for first time The harrowing experiences of former slaves and poor whites in the post-Civil War South, can be found among the 1,200 rolls of microfilm and digitized records, now part of the Freedmen’s Bureau Collection at Suffolk University’s downtown campus on Tremont Street. Photo: Catherine McGloin

Thousands of personal records from formerly enslaved African Americans, recently gifted to Suffolk University by the Afro-American Historical and Genealogical Society and the National Archives and Records Administration, are now publicly available in downtown Boston. 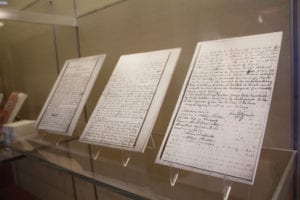 The harrowing experiences of former slaves and poor whites in the post-Civil War South, can be found among the 1,200 rolls of microfilm and digitized records, now part of the Freedmen’s Bureau Collection at Suffolk University’s downtown campus on Tremont Street. Photo: Catherine McGloin

“This information will be valuable for everyone – students, educators, historians, genealogists,” said Joe Keefe, archives specialist at the National Archives and Records Administration site in Waltham, in an earlier statement. “People can now have permanent access to this collection that highlights black history prior to and after the Civil War.”

The Freedmen’s Bureau, also known as the Bureau of Refugees, Freedmen and Abandoned Lands, was established by Congress in 1865 to provide aid to former black slaves and poor whites in the South. The bureau’s document collection contains vital information about the African American experience in the post-Civil War South, details that until recently were lost to historians and those trying to trace their ancestry.

Copies of the documents were requested by AAHGS in 2001 from national archives in Washington D.C., where the originals are still housed, and were kept by the national records agency in Waltham. This is the first time that these papers will be permanently housed in central Boston for students and the general public to access.

Considered by Keefe as “one of the richest and most extensive sources,” for investigating conditions in the post-Civil War South, Pierce spoke about the personal connection she felt reading through the letters, land records and other “heart-wrenching,” documents when AAHGS were indexing the papers in 2016.

“I personally felt the strength of my forebearers and of so many others who endured these hardships,” said Pierce.

Filling in the gaps

It is hoped that AAHGS members and other communities in Boston will use the records to trace kin beyond what Bellinger described as the “1870 wall.” Before this date, few African Americans were identified in legal documents according to their birth name or location. Instead, most were recorded as anonymous statistics in slaveholder accounts. This makes it almost impossible for genealogists trying to locate family members prior to Reconstruction. The Freedmen’s Bureau Collection fills in many of the gaps in earlier records.

While the collection reveals rare details about some of the four million newly freed African Americans in the post-Civil War South, it also provides a unique window on the lives of their contemporaries. Learning about the individual experiences of ex-soldiers, widows and small business owners, for example, helps people better understand this tumultuous period and gives context to our current social and political climate, said Keefe.

Bellinger intermittently taught a research course using the Freedmen’s archives from 2006 until 2015. He hopes that having the collection at Suffolk University will enable him to teach the program once more, after years of trying to get students out to Waltham, an experience Bellinger fondly remembered as being more like “a cattle drive,” than a research excursion.

Griffis told the Banner that this acquisition strengthens the university’s relationship with AAHGS and the National Archives and Records Administration. The Freedmen’s Bureau Collection will join Sawyer Library’s Clark Collection, 6,000 volumes of African American literature from almost 3,000 authors, directed by Bellinger. This will cement Suffolk University’s commitment to the preservation and study of African American history and attract future scholars in the field, Griffis said.

The partnership between the three organizations has developed over two decades. The New England chapter of AAHGS has worked closely with the national archives since the group formed in 1997, and last year the national archives donated the Freedmen’s Bureau Collection to the society. Pierce stored 23 boxes of microfilm in her home until Suffolk University was chosen as the collection’s permanent home.

“The importance of this partnership,” said Keefe, “is that we can all share information, share ideas, and share history to a wide variety of diverse communities and populations.”

Bellinger’s presentation was the last of the morning before attendees were invited to enjoy a lunch buffet. He closed proceedings on an optimistic note. “It’s a wonderful journey that’s just beginning,” he said.