Views differ on how to respond to Hub housing crisis 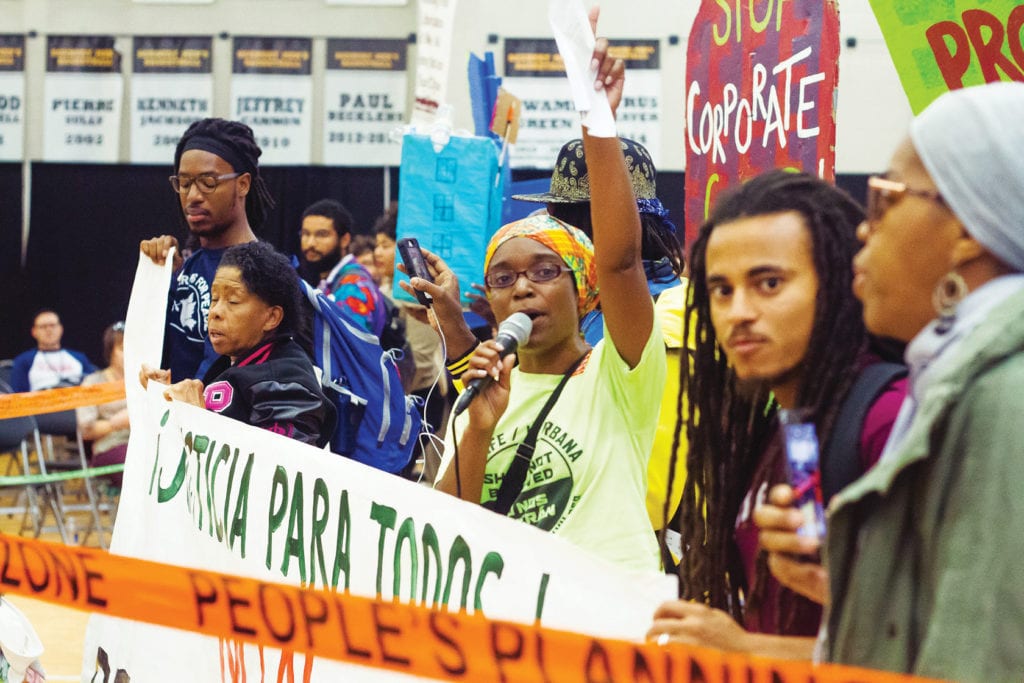 Scores of neighborhood activists, real estate developers and urban planning professionals gathered at Roxbury Community College last week for the YIMBY Town conference, a convening of like-minded souls who rally around a “Yes-In-My-Back-Yard” approach to meeting the demand for new housing.

Many speakers and panelists at the conference echoed the movement’s underlying belief that increased housing production is essential to maintaining affordability and vitality in cities.

Just a few blocks away at the First Church of Roxbury, affordable housing activists met to iron out strategies the city could employ to stanch the tide of displacement they see occurring, despite the addition of thousands of housing units in the four years since Mayor Martin Walsh launched his Boston 2030 housing plan.

The conflicting views of Boston’s crisis of affordability point to a broader debate between those who believe in the market-driven solutions that undergird the administration of Mayor Martin Walsh’s Imagine Boston 2030 plan, and those who denounce the plan as “trickle-down housing theory.”

Walsh administration officials, while pursuing affordable housing development and preservation, have insisted that the city’s skyrocketing rents and housing costs can only be brought under control through robust production of new units.

Affordable housing advocates, however, note that little of what’s being built matches the incomes of existing Boston residents. Just 9 percent of the 27,513 units built or permitted under the newly-revised Boston 2030 plan are affordable to the 45 percent of Boston residents who earn $43,000 or less.

The recently-updated Boston 2030 plan — which now aims to build a total of 69,000 new units of housing in Boston by 2030 — is predicated on the projection that the city’s population will swell from its current 670,000 to 769,000 by 2030 and the idea that building new housing units will help maintain affordability in the city. But activists say so far that’s not been the case.

While there is no hard data on displacement of existing residents, rents and the costs of houses and condominiums clearly have been increasing in every neighborhood in the city.

For YIMBYs, production is key

From the perspective of many at the YIMBY conference, including its keynote speaker, Harvard economist Ed Glaeser, production of new housing units, including luxury units, is key to maintaining the affordability, diversity and civic health of a city. In his address, Glaeser held up San Francisco as an example of a city with restrictive housing codes that have prevented the construction of new units, driving up rents and purchase prices.

“Everywhere you look you can see there’s no repealing the laws of supply and demand,” Glaeser told the overwhelmingly-white crowd that gathered at the Roxbury Community College Media Arts Center for the keynote address. “If you say no to new development, you’re going to ensure the town is a boutique town where no one can afford to live.”

But for affordable housing activists, the mayor’s housing plan, more than half-way to its original goal of 53,000 new units, isn’t working.

“The stuff that they’re building is not at a price point that folks who live in Boston can afford,” said Darnell Johnson, executive director of the Right to the City Coalition. “They’re driving up the market. The new houses that are coming on line are pushing up prices in surrounding areas.”

Johnson cited Chinatown, a traditionally working class immigrant community that stands near ground zero of the city’s luxury condo boom. As steel and glass luxury towers have shot up, the low-rise tenement buildings in their shadow that have traditionally housed immigrant families have seen unprecedented displacement.

That same scenario is playing out with varying degrees of intensity in neighborhoods including Roxbury, East Boston and Egleston Square, as developers build luxury units amid middle- and working-class neighborhoods, driving up land costs and rents.

“They keep telling us that the trickle down will help,” said Darnell Johnson. “We don’t have proof of it.”

The debate over development and displacement flares up in meetings across the city. Dorchester residents taking part in the Boston Planning and Development Agency’s Glover’s Corner planning process last week voiced concerns that the luxury complexes, such as Dot Block, being built in Dorchester are raising land values and rents in the neighborhood. “Shouldn’t the city be looking out for the interests of its citizens, not investors from California?” said Dorchester resident Judith Baker during a roundtable discussion with BPDA Senior Planner Ted Schwartzberg. “Without some sort of emphasis on harm reduction, I can’t buy into this plan.”

Schwartzberg attempted to keep the conversation within the realm of what is possible to ask of profit-driven developers within current city guidelines, at one point using colored Legos to demonstrate what he said would be a feasible balance between affordability, market rate units and density. The activists he sat with repeatedly pushed the conversation into the impacts of development on existing residents in the historically working-class community.

“I think it’s a question of whether we’re having the right discussion,” housing activist Mike Prokosch told Schwartzberg.

While the BPDA, which conducts planning exercises and oversees large development projects, is guiding private development projects through the maze of community processes, the Walsh administration has updated its Boston 2030 plan to reflect a more rapid influx of residents. Released this week, the new plan has raised the bar from 53,000 new units to 69,000 and is calling for the creation of 15,820 income-restricted units.

The total of income-restricted units will include 1,000 privately-owned apartment units the city plans to remove from the speculative market through its Acquisition Opportunity Program.

The plan also calls for the city to work with nonprofit organizations to prevent evictions and “mitigate the effects of gentrification” through means such as home-buying programs, support of community land trusts and cooperative housing.

The new report takes into account new projections for population growth in Boston. While in 2014, city officials believed the city’s population would grow by 91,000, the new projection, based in increased growth in recent years, is an increase of 142,000.

In addition to the creation of income-restricted units, which require subsidy to build and maintain, the report calls for the construction of 20,700 “middle market” units, affordable to middle-income wage earners, up from the 16,000 units called for in the 2014 plan.