Vision for transport in Mass. unveiled 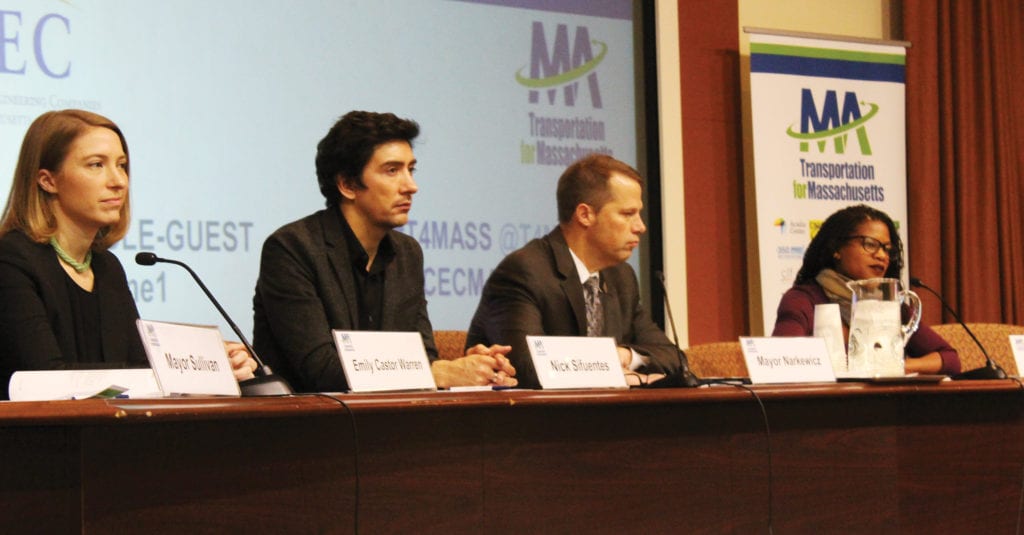 Advocates, city councilors and state senators gathered last week to hear findings from Governor Charlie Baker’s commission on the future of transportation in Massachusetts, and to discuss ways to make their recommendations a reality.

Five days after the Commission on the Future of Transportation in the Commonwealth handed their two-volume report to Baker, Steve Kadish, chair of the commission, presented the group’s findings to a packed auditorium in the Massachusetts Continuing Legal Education headquarters in downtown Boston Dec. 19.

“We hope this report has provided a strong base of information, long-term directional guidance and some specific near-term steps to help prepare Massachusetts to meet the challenges ahead,” said Kadish.

Kadish and 18 other experts joined the commission at Baker’s request in January, and the breakfast event, co-sponsored by Transportation for Massachusetts and the American Council of Engineering Companies of Massachusetts, marked the conclusion of their work analyzing how climate change and shifting demographics may impact the state’s transportation system by 2040.

The group’s comprehensive report, titled “Choices of Stewardship: Recommendations to Meet the Transportation Future,” is split into two volumes. While the second, smaller volume comprises citations from relevant articles and resources used to develop their recommendations, the first delivers the facts about the current state of Massachusetts’ transportation system.

Currently ranked 47th in the nation for average commute time, Massachusetts is home to more than 2 million registered vehicles, while the state’s transportation sector has become the largest single source of emissions.

Kadish said that shifting demographics and the impact of climate change will place greater pressure on the state’s roads and public transit system. He said that issues such as congestion and poor infrastructure will only worsen if they are not addressed in the near future.

“There are four pillars upon which our transportation resource plan should be built,” said Kadish. “One, maintenance and modernization; two, climate resiliency; three, decarbonization; and four, priority investments.”

Under these four pillars were arranged the commission’s 18 recommendations, which include easing congestion by financing a public transport system that can cope with high volumes of riders; improving Massachusetts’ infrastructure for electric vehicles by installing more charging docks; supporting alternative fuel systems that would help the state meet its zero emissions target; mandating that by 2040 all new cars, light duty trucks and buses sold in the state are electric; and remodeling the MBTA from a commuter train system to a regional train system, connecting transit hubs across the state.

“Among the most significant contribution that today’s decision-makers could make to the public for the year 2040 is to commit to providing sufficient resources for the proper maintenance, operation and updates to the state’s transportation network,” concluded Kadish.

Getting decision-makers to sign up to the commission’s recommendations may not be so easy.

“I know there’s excitement about these things in the beginning,” said commission member Ken Kimmell, who spoke briefly after Kadish about the need for those on Beacon Hill to act, and the need to “hold their feet to the fire” to make sure the report isn’t “left on the shelf gathering dust.”

Kimmell and others may be encouraged by the announcement Baker made the day before the presentation last week — that Massachusetts will join a coalition of eight Northeast and mid-Atlantic states tasked with developing a system to reduce carbon emissions from the transportation sector.

When asked by the panel moderator, the Boston Globe’s interim Editorial Editor Shirley Leung, what resources they will need to move forward with the commission’s proposals, Narkewicz put it most plainly: “Money.”

Elaborating on this, Sullivan called for more federal tax dollars to help fund proposed initiatives. “We can’t do this alone,” he said. “We need a federal partnership on this as well, and that federal partnership, at the moment, has been lacking.”

It’s not just federal government support that will be necessary to achieve the goals laid out by the commission, but the support of local, working-class communities, said Edwards.

“It can’t just be a message of urgency that gets people to consume electric vehicles,” said the city councilor. “It needs to be a message that resonates with them, and the only way you’re going to do that is to set a table that is equitable from the very beginning of these conversations.”

Edwards said that alongside expert opinions, support and concerns from the working poor should also be considered in any future transit projects.

“If they’re not in positions to talk about why they would want to do these things,” she said, “then you can talk all you want about how great they are for everyone to use, but the people, the everyday individuals, will not use them.”

Emphasizing the need to be inclusive and intentional in any future transportation planning, Kadish said, “This is a generationally important moment that requires attention and action from our state and municipal government, business and civic leaders, as well as our residents, families and communities.”