Members of the Service Employees International Union local 32BJ gathered to protest against Flight Services and Systems (FSS), a contractor that employs workers at the airport and has been accused of not paying wages to its employees. 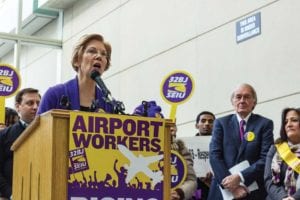 FSS has been ordered or agreed to pay $1 million for wage theft claims nationwide since 2006. There have been more than 1,000 wage violations by FSS in Boston, and there are currently at least 10 wage theft claims against the company being investigated by the attorney general.

“I know what it’s like to work without pay,” said Sonia Hernandez, a former ticket-taker at the airport who was employed by FSS, and who filed a complaint against the company with the attorney general’s office this month after allegedly receiving three short checks and being denied her last paycheck. “Sadly, this treatment is nothing new at FSS. It’s time for the company to change its way or to leave the airport.”

Valyria Lewis, a national representative of the American Federation of Government Employees, encouraged the gathered workers to form their own union. She explained that when she began working as a TSA agent, she was told that union organizing was a fireable offense.

Lewis also noted, as did other speakers at the rally, the significance of the holiday for the rally, as Martin Luther King Jr. was a noted labor advocate, and was in the process of building a sanitation workers’ union when he was assassinated.

Rocio Saenz, vice president of SEIU, spoke against the alleged wage theft and hour cuts by FSS, and called on Massport to hold its contractors responsible.

“This wage theft is not only illegal, but it shows a disrespect for the important roles these airport workers play keeping Logan Airport safe, clean and welcome for the public,” Saenz said.

Neither Massport or FSS responded to requests for comment.

The protesters also showed their support for federal workers at the airport, including TSA agents, who have been working without pay since Dec. 22, after Democrats refused funding for a border wall and President Donald Trump forced a government shutdown.

Senators Elizabeth Warren and Ed Markey, who attended the rally, spoke out against the shutdown, which they both blamed on the president.

Warren talked about her family’s working-class history, explaining that her father, a janitor, relied on every paycheck to make ends meet, so she knew from experience what the government workers were dealing with without their pay.

“[President Trump] is holding every one of those paychecks hostage,” Warren said. “This shutdown is not about border security. This latest so-called deal is about stirring up hate and division.”

Markey echoed Warren’s sentiments, noting that the TSA was created following the Sept. 11, 2001 attacks to protect the security of airports.

Warren again emphasized the significance of the day and the legacy of Martin Luther King Jr., saying that the principles he advocated for were especially important in this struggle.

“We need a strong labor movement now more than ever,” Warren said. “This was Dr. King’s fight, this is 32BJ’s fight, and shoulder-to-shoulder, that’s how we will win this fight.”