At a Boston City Council hearing last Tuesday, affordable housing advocates voiced their support for a city law that would establish an investor and commercial properties transfer fee, while members of the Greater Boston Real Estate Board expressed opposition.

The proposed legislation, filed by Councilors Lydia Edwards and Kim Janey, would allow the city to impose a transfer fee of up to 6 percent, split between buyers and sellers, on sales of commercial and investor-owned properties exceeding $2 million. 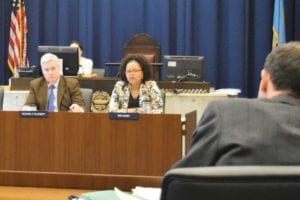 The proposal also includes a higher fee, up to 25 percent, on repeat transfers of property within 24 months, in order to deter “flipping” practices in neighborhoods.

All funds raised by the new fees would go to the city’s neighborhood housing trust for the production and preservation of affordable housing.

The fee would exempt owner-occupants, transfers between family members and sales under $2 million.

“This would be another tool in the toolbox to prevent displacement,” said Edwards. “The city has created many tools, but all of them need more funding.”

The city’s current housing programs include the acquisition opportunity program, the landlord guarantee program, the homebuyer assistance program and the accessory dwelling units program, along with the Inclusionary Development Policy and linkage fees that mandate affordability requirements and developer-paid fees on certain projects.

“Flipping is not good for neighborhoods and the Inclusionary Development Policy and linkage is not enough,” said Edwards.

Janey said, “Flipping sounds like it can improve neighborhoods, but it really displaces residents, increases rents and does not ensure work being done on a house is safe and secure.”

Sheila Dillon, chief of housing and director of neighborhood development, said she estimates that if passed, the transfer fee would bring in revenue in the hundreds of millions, depending on market factors, exemptions and the actual percentage of taxes levied.

Emme Handy, chief financial officer for the city, said that her department is interested in the concepts of the proposed law, but has concerns about possible unintended consequences on market behavior.

“We’re concerned that the greater cost of transaction fee, the more likely people will alter their sales behavior to avoid the fee,” she said.

Edwards said that one potential unintended consequence of the home rule petition is that property owners might increase rents for tenants to compensate for paying a transfer fee, but, she said, “We’re willing to exempt the fee if property owners will ensure permanent affordable rent.”

Gayle Willett, commissioner of the City of Boston Assessing department, said she is concerned that the proposal might “have repercussions on property taxes and shift the tax levy on residential tax payers,” “decrease residential transactions” and “further reduce inventory.”

Edwards and Zakim pointed to New York City’s mansion tax, a 1 percent transfer fee on properties priced at more than $1 million, which was implemented in 1989 and, Edwards noted, “has not stopped or slowed down development there.”

Zakim said, “It belies the hand wringing around the effects on the market that this proposal would have, when it’s being done in New York and other cities.”

Greg Vasil, CEO and president of the Greater Boston Real Estate Board, said that although his organization is deeply concerned about gentrification and displacement, “we need a balance between economics and production,” and “a 6 percent tax on all transactions would upset that balance.”

Melvin Avery Jr., a Boston realtor, said, “We shouldn’t penalize risk-takers who fix buildings and help neighborhoods. I remember walking through drug-infested dens in Roxbury, the South End and Mattapan, and now those neighborhoods are beautiful.”

Addressing the panel of real estate stakeholders, Edwards said, “I’m not surprised at your opposition. But just to be clear, the affordable units being produced are not actually affordable to most Bostonians.”

“You’re experts in real estate … Well, the people behind you are experts in displacement,” she added, referring to the activists seated in the Iannella Chamber.

Edwards noted that the bill is very flexible and allows for various exemptions, including in the case of a downturn in the market or during a bankruptcy.

“There is a balance that can be struck to not hurt, as much as you’re claiming it would, your bottom line, and create additional revenue for housing,” she said.

Vasil told Edwards that GBREB members would be more flexible in agreeing to a solution if the costs of land, labor and materials weren’t so high for each development project.

Hillary Pizer, associate executive director of Massachusetts Affordable Housing Alliance, testified at the hearing in support of the proposal.

“We need to do something that is much bigger than what we are doing now. We can figure out the unintended consequences and try to adjust for it, but we need this money,” she said.

He added, “As neighborhoods flip, new construction creates more demand than it solves. We need money to subsidize rents, not just at 70 percent of AMI but at 40 percent, that’s actually affordable.”

Edwards said the council will continue to consider fee waivers, incentives or other mechanisms such as graduated fees to “strike the right balance.”