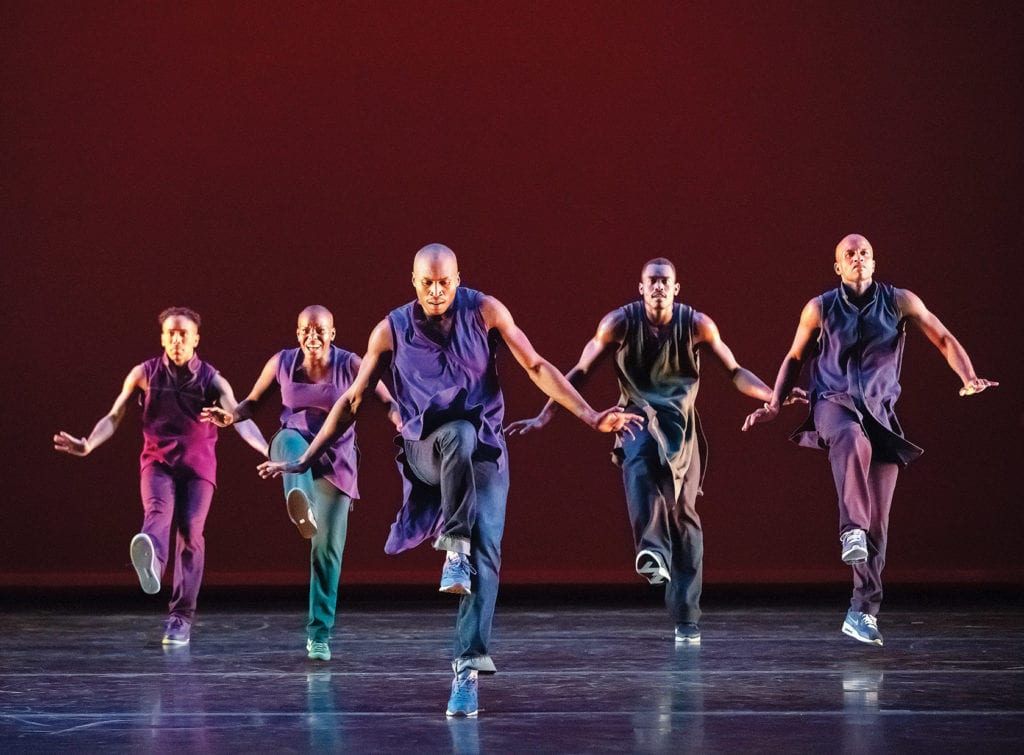 For 51 of its 60 years, the Alvin Ailey American Dance Theater has come to town, each annual and wildly anticipated visit presented by the Celebrity Series of Boston. Last week, again presented by the Celebrity Series, the company brought its 60th-anniversary program to the Boch Center Wang Theatre for five performances. The programs featured Boston premieres of two contemporary works as well as a Sunday matinee, “Timeless Ailey,” a sampling from the founder’s 30 years of choreography, from 1958 to 1988. The company concluded all five programs with Ailey’s renowned 1960 masterwork, “Revelations.”

Thursday evening began with the most stirring of the contemporary works in this year’s program, “Kairos,” a 34-minute piece by Wayne McGregor, choreographer of the Royal Ballet in London. Ailey is the first American company to present the 2014 work, and the 10 Ailey dancers performed it as if it were created for them.

Its title is the Greek word for an opportune time or season, and its score is a re-imagined version of Vivaldi’s “The Four Seasons” by composer Max Richter.

The movement and music, along with the set by Idris Khan, costumes by Moritz Junge, and lighting by Lucy Carter, formed a unified, deeply moving whole. Spare costumes showed the beauty of dancers’ bodies and the sinuous grace and athleticism of their movement.

The work began with a high-pitched, fast, minimalist electronic passage matched by strobe-lit dancers, who embodied each throbbing note. They performed behind a horizontal grid of black and white that resembled a musical scale or a hand-woven African cloth. Slowly the scrim receded to show the dancers, who seemed to be removing veil-like wrappings. As a man and woman joined in a duet, performing as equals in power and grace, the music evolved into a lyrical, fully orchestrated passage. They were like gods, distant but exposed, and combining sensuous beauty with dignity.

In another segment, a quintet of female dancers resembled nymphs as they moved in angular, almost military formations. A contingent of male dancers followed, performing in a fluid ensemble. McGregor seems to enjoy mixing up male and female stereotypes. Staging sorcery, too, injected surprises, as the grid returned only to shift back and forth from full to picture-frame size, capturing the rhythmic shifts of the movement and music.

Coming after this majestic piece, Jessica Lang’s 2018 work “EN,” which takes its title from a Japanese word signifying circle, fate or karma, seemed trivial with its too-literal evocation of the passing of time. The score by Jakub Ciupinski, with slow drumbeats and then clicks suggesting the movement of a timepiece, accompanied the 12-member ensemble as they encircled one dancer, Michael Jackson Jr., as if he were a spoke in a clock. Anchoring the set was a large circle that later became the size of a beach ball and was tossed, pendulum-like, between the dancers. As the ensemble gained momentum, they earned rousing applause from the audience.

Friday evening opened with the Boston premiere of “Lazarus,” a 2018 work by Rennie Harris, the company’s first artist-in-residence and a distinguished hip-hop choreographer celebrated for bringing this street-honed form into the repertoire of major dance companies.

Crafted to honor the Ailey legacy, and the company’s first two-act work, “Lazarus” has been widely praised. Just as the works of company founder Ailey made African-American movement and experiences as prominent throughout the world of dance as ballets such as “Swan Lake” or “The Nutcracker,” here is a next-generation choreographer bringing forward the expressive potential of a new development in ever-evolving African-American cultural traditions—in particular, the hip-hop vein known as “GQ” that he grew up with in North Philadelphia.

Yet “Lazarus” was hindered by its melodramatic soundtrack and long stretches in the 33-minute first act that portrayed the communal suffering and pain of African-Americans more through mime than dance, starting in slavery and continuing through the Jim Crow era and on to the present day. Its 25-minute second act was equally unrelenting in its high-energy, near-euphoric, house-inflected ensemble dancing, which, while compelling in its blend of African forward body bends and rapid-fire intricate footwork, expressed high spirits unearned by the preceding narrative.

Most affecting and suggestive of the potential within this gifted choreographer’s street-bred idiom were two movement passages in the first act. In one, Daniel Harder, a “pilgrim of sorrow” in the tradition of Ailey’s soloists in his early sections of “Revelations,” tumbles into a lyrical, slow, hip-hop rendering of anguish and the effort Ailey spoke of as “trying to get up out of the ground.”  At another point, a subgroup of the work’s 15-member ensemble, standing motionless, suddenly tilted their heads in a searing image of lynching.