“Caroline, or Change,” produced by Moonbox Productions and playing at the Boston Center for the Arts Calderwood Pavilion through May 11, is set in the 1960s. But its themes of immigrant barriers, economic inequity and race relations feel extremely relevant in 2019.

The production, with music by Jeanine Tesori and book and lyrics by Tony Kushner, follows Caroline Thibodeaux (played by Yewande Odetoyinbo), an African American single mother working as a maid in a white, Jewish household. Caroline strikes up an unlikely friendship with Noah Gellman (played by Ben Choi-Harris), the 8-year-old stepson of her employers. But things get complicated when an incident amongst them widens the gaps of privilege between the unlikely friends. The show examines the lines of race and access in relationships and how to balance providing for one’s own with helping others.

On the web
Learn more at:
http://bit.ly/2Vaue3N

Lovely Hoffman, a Roxbury native who plays one of the singing narrators referred to as “the radio,” says the tumultuous ’60s bear a remarkable resemblance to our present day. “This is a pivotal time in American history. One of the main themes in this show is change,” says Hoffman. “Today I think people are faced with the same issues of livable wage and immigrant rights.”

Hoffman says she was drawn to the play because of its realism. Like life, the show is complicated and doesn’t necessarily tie up in a pristine bow at the end. The plot takes place primarily in the basement where Caroline attends to laundry and other chores. The score draws on classic American genres to supplement Caroline’s feelings and experiences. “I absolutely love the music for this show,” says Hoffman. “The music is powerful because it crosses genres with pop, gospel and soul.” 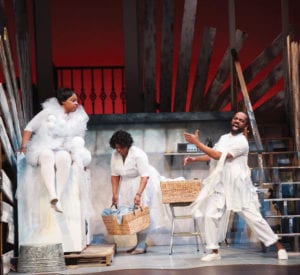 Moonbox Productions partners with a nonprofit for each of their shows, sharing website and ad space to boost the cause. For “Caroline, or Change,” Moonbox partnered with UTEC, an organization that assists young adults ages 17–25 in overcoming challenges of poverty, gang involvement, unemployment and cultural barriers through education, civic engagement and workplace development.

For Hoffman, workers’ rights is a theme equally important to race in this show. “I’m thinking specifically about labor issues and working for a livable wage. Today people are still fighting for that,” she says. She parallels Caroline’s slow saving of coins to the recent Stop-and-Shop worker strike against benefit cuts.

In the play, Caroline has one son fighting in Vietnam; JFK is assassinated, leaving the country in political turmoil; and  the Civil Rights movement presses on in hopes of a more equitable future. Today’s audience, living in that future, is asked how much progress has been made.