Cops arrest 18 during rally at South Bay House of Correction More than 1,000 protestors marched last Tuesday from the New England Holocaust Memorial in downtown Boston to the South Bay House of Correction in a demonstration against the United States government’s detention of immigrants in facilities at the U.S. border with Mexico and across the country. 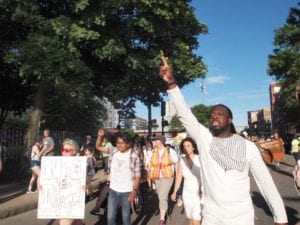 The demonstration, organized by an array of Jewish groups and the immigrant rights group Movimiento Cosecha, ended with the arrest of 18 protesters who blocked the entrance of the South Bay jail. Suffolk County District Attorney Rachael Rollins declined to seek prosecutions for those arrested.

Many in the predominantly Jewish crowd carried signs that read “never again,” a reference to a slogan adopted by many in the Jewish community in the wake of the Holocaust. Over the last few weeks, many people, including U.S. Rep. Alexandria Ocasio-Cortez, have compared the detention centers to the concentration camps Germany used during the Holocaust.

Several congressional representatives have made visits to the detention facilities in recent days, including Massachusetts Reps. Ayanna Pressley, Joe Kennedy III and Lori Trahan. The legislators shared disturbing details of what they saw in the facilities — including lack of access to clean water and showers, children sleeping on concrete floors and people held in standing-room-only cells.

Demonstrators who turned out last week repeated the “never again” slogan as the refrain of chants and songs.

“We’ve got ancestors at our backs,” they sang in one song. “We’ve got generations forward/ We’ve got land and spirit/ Never again/ Para nadie.” Many connected their activism to the shared experience of the Holocaust and the parallels with current events.

“My grandmother was a Holocaust survivor,” said Arlington resident Michaela Caplan. “The Holocaust offers us a lesson about what a mass atrocity looks like. What it looks like when it starts. It teaches us the importance of not looking away.”

The demonstrators marched through the theatre district, down Shawmut Avenue and Columbus Avenue to Massachusetts Avenue before heading to the South Bay jail. Along the way, spectators cheered the demonstrators on, with some joining in. Some drivers, brought to a standstill by the long line of marchers, honked and gave the thumbs up the demonstration.

The demonstrators chanted slogans against the detention centers and called for Palestinian rights and solidarity with immigrants.

Marching along Massachusetts Avenue, Roslindale resident Sara Barcan said she felt compelled to join the march at the Holocaust Memorial after learning of it through social media.

“As a Jewish woman lucky enough to be the child of immigrants, I feel I have to stand up,” Barcan said. “It’s really unbelievable to hear the reports of how children are being treated. We all want to be proud to be American. We want to make sure we’re treating people in a way we’d want to be treated.”

At South Bay, the Jewish activists and Cosecha members rallied the crowd as demonstrators were being arrested. Cosecha member Cata Santiago said the activism of the Jewish demonstrators is helping change the terms of the debate.

“Instead of debating the semantics of concentration camps, they’re bringing to light their experience of the Holocaust,” she told the Banner.

But Santiago added that the heightened awareness of the conditions in the camps is just the latest development in a years-long crackdown on immigrants. While a photograph of a man and his toddler daughter drowned in the Rio Grande has captivated the attention of many in the nation, Santiago wants people to know many more people are have suffered under immigration crackdowns over the last few years.

“We need to remember people while they’re alive and recognize their dignity,” she said. “This has been going on for a long time,” she said. “We can’t be selective in our collective outrage.”