The proposed 25-story Rio Grande apartment tower would be the tallest building in Dudley Square. IMAGE: COURTESY STULL AND LEE

If all goes according to plan, the 25-story Rio Grande tower in Dudley Square will include 241 rental units, a restaurant, a public atrium, retail space and no onsite parking spaces.

During a Boston Planning and Development Agency meeting at the Bruce Bolling Municipal Building last week, parking dominated the conversation on the new development as Roxbury residents, abutters and business owners weighed in. The project — perhaps the most ambitious undertaken in Roxbury in recent history — is being advanced by team of African American real estate development professionals led by Lisa Guscott, CEO of Long Bay Commercial Properties, which owns the Rio Grande site.

During last week’s presentation, architect David Lee said the team is in discussions with property owners in the Dudley Square area to secure off-site parking for the building. Although the building would normally be subject to a requirement of 0.7 parking spaces per unit, Lee said the tower’s proximity to the Dudley Station bus terminal allows the city to waive that requirement.

“This is as a transit-oriented development project,” he said.

The proposed project would be built on land that lies between Roxbury Street, Washington Street, Marvin Street and Shawmut Avenue. The limestone-faced facade of the “Institution for Savings in Roxbury and its Vicinity” building will be retained and incorporated into the design of the new building. Because of the proposed tower’s relatively small footprint, building below-grade parking would be prohibitively expensive, said development consultant Beverly Johnson.

“It wouldn’t work from a cost perspective or a design perspective,” she said.

Still, some at the meeting complained that the addition of the 241 units without onsite parking would increase pressure on parking in the area. Lee emphasized that many Boston residents are forgoing car ownership in favor of public transportation. With traffic and congestion worsening, Lee argued, car ownership should be discouraged. 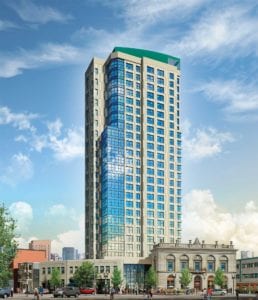 The Rio Grande building will retain the facades of two buildings on Washington Street that will be incorporated into the complex. IMAGE: COURTESY STULL AND LEE

“If you’re complaining about congestion, how do you think adding 240 cars to the building would help?” he said.

Lee added that the team is in discussions with the Urban League of Eastern Massachusetts about developing parking that Rio Grande residents could use at the nonprofit’s Warren Street site.

BPDA Deputy Director for Community Economic Development Dana Whiteside assured attendees the city will not allow the development to move forward unless it has a firm commitment for off-site parking.

“Parking has to be a part of this,” he said. “If there’s no parking, the development team won’t be able to pull their permits.”

The Rio Grande development isn’t the only proposal that may put a strain on parking in Dudley Square. Six major city-owned lots have been put out to bid over the last year, including the Blair Lot on Washington Street, which currently provides parking for up to 94 vehicles. While some projects, such as the 135 Dudley Street lot at the site of the former Area B-2 police substation, include a net-positive gain of parking spaces, other projects may seek designation as transit-oriented development, allowing them to waive requirements for onsite parking.

Cheryl Straughter, whose restaurant Soleil sits across from the site of the proposed Rio Grande development, expressed support for the project and for Guscott, but voiced concern over the city’s plans to bid out land currently used as surface parking lots in the area.

“Are any of the parcels released going to have parking?” she questioned.

On the other hand, Straughter said, Dudley Square needs more development like the Rio Grande project to revitalize the area and keep businesses alive.

“I remember Roxbury the way it was,” she said. “There were more businesses in the area. Dudley as it is now is not a destination. It’s a pass-through.”

Straughter and others said that businesses in Dudley Square would benefit from a greater income diversity of residents. While the housing around the square is currently predominantly restricted to low-income households, 80 percent of the units in the Rio Grande development would have market-rate rents. On publicly-owned parcels in the area, the city requires residential developments to have a mixture of one-third affordable units, one-third moderately-affordable units and one-third market-rate units. This requirement does not apply to projects on privately owned parcels such as the Rio Grande site.

Lee said the addition of the new building’s atrium and restaurant space would help enhance the area.

“We think Dudley ought to be competitive with any commercial district in the city,” he said. “In order for that to happen, we need amenities.”

“This is a family that has supported many things we’ve all benefitted from,” she said.

As for the addition of new housing units in Dudley, the Rio Grande project is one of four currently review by the BPDA. Jones said the changes will be good for the neighborhood.

“Roxbury is changing,” she said. “Nothing is going to be the same.”