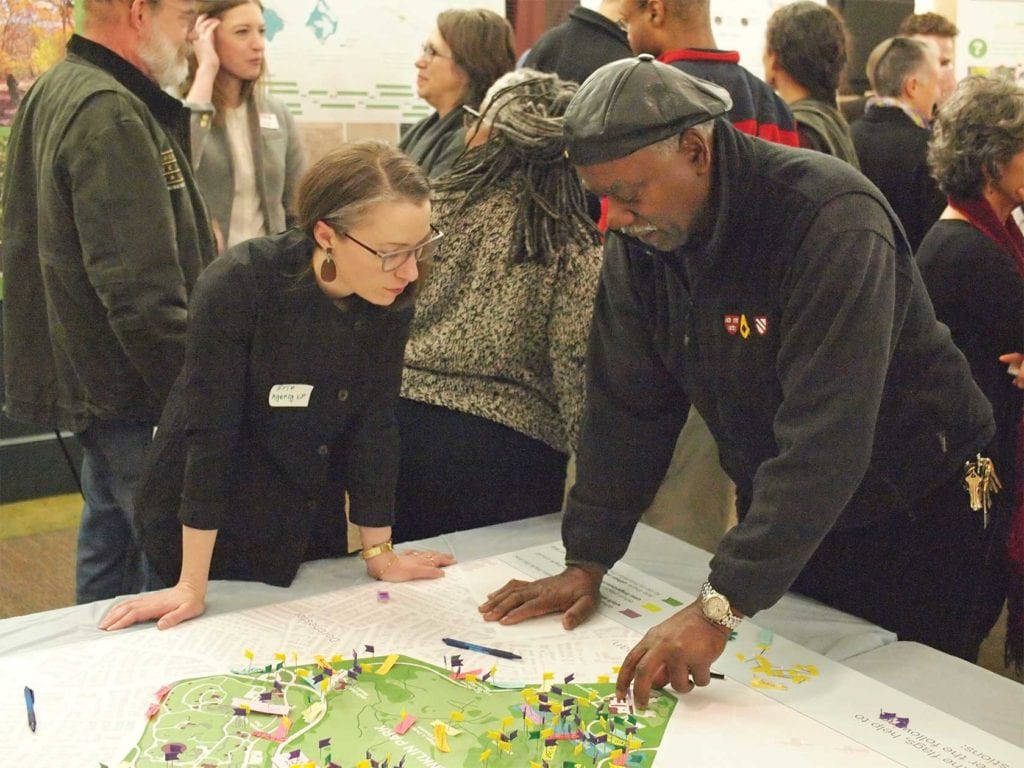 Nearly 200 people gathered at the Franklin Park golf clubhouse last week for a public meeting aimed at ironing out a plan for a $28 million investment in improvements to what many describe as the crowning jewel of the Emerald Necklace park system.

The city of Boston’s $102 million sale of the Winthrop Square garage provided the funding for the park’s planned renovation. The details of that renovation, however, are yet to be worked out. The Jan. 28 meeting was the first in a series of planned meetings to develop a new master plan for Franklin Park.

“We’ve not made any decisions,” said Lauren Bryant, a project manager for the city’s Parks Department. “We didn’t come into this process with any pre-conceived ideas.”

There is one idea city officials plan to implement: creating a $5 million endowment that would fund additional park maintenance positions. Currently there are just three maintenance workers for the 280 acres under Parks Department jurisdiction.

When the park was originally designed by noted landscape architect Frederick Law Olmsted in the 1890s, the vision was for a country park in the middle of the city. In the following decades, however, portions of the 500-acre park were separated for specialized activities. The greatest portion of the park is given over to the William J. Devine Golf Course, which occupies 100 acres. The Franklin Park Zoo, Shattuck Hospital and a Parks Department maintenance yard also occupy parts of the park.

Current uses of the public spaces include sporting events in the Playstead area, such as soccer, cricket and cross-country races, and football and track events in White Stadium. Cultural events in the past year included the Caribbean Carnival, the BAMS music festival and Roxbury Homecoming.

Many at the meeting said that day-to-day, they use the park for exercise and recreation.

“I bring my grandchildren to the zoo,” Roxbury resident Angela Williams told the Banner.

“This is the biggest investment Franklin Park has undergone,” he said. “If done right, it could make Franklin Park rival Central Park. We can really make it one of the best parks in the country.”

Mattapan Neighborhood Council Chair Fatima Ali-Salaam said the success of the planning process will depend largely on how well the planners solicit community input.

“This could be a model for how parks of this size can be integrated into the fabric of the community,” she said.

The master plan currently under development will be the third the park has undergone in the last 40 years. Earlier plans were drawn up in 1980 and 1990.

Landscape Architect John Kett, a managing partner at the firm Reed-Hilderbrand, which is consulting on the project, cautioned that while the $28 million allocated to the park can go a long way toward making it more welcoming to users, it will not radically alter the park.

“Twenty-eight million sounds like a lot,” he said. “It will go very quickly.”