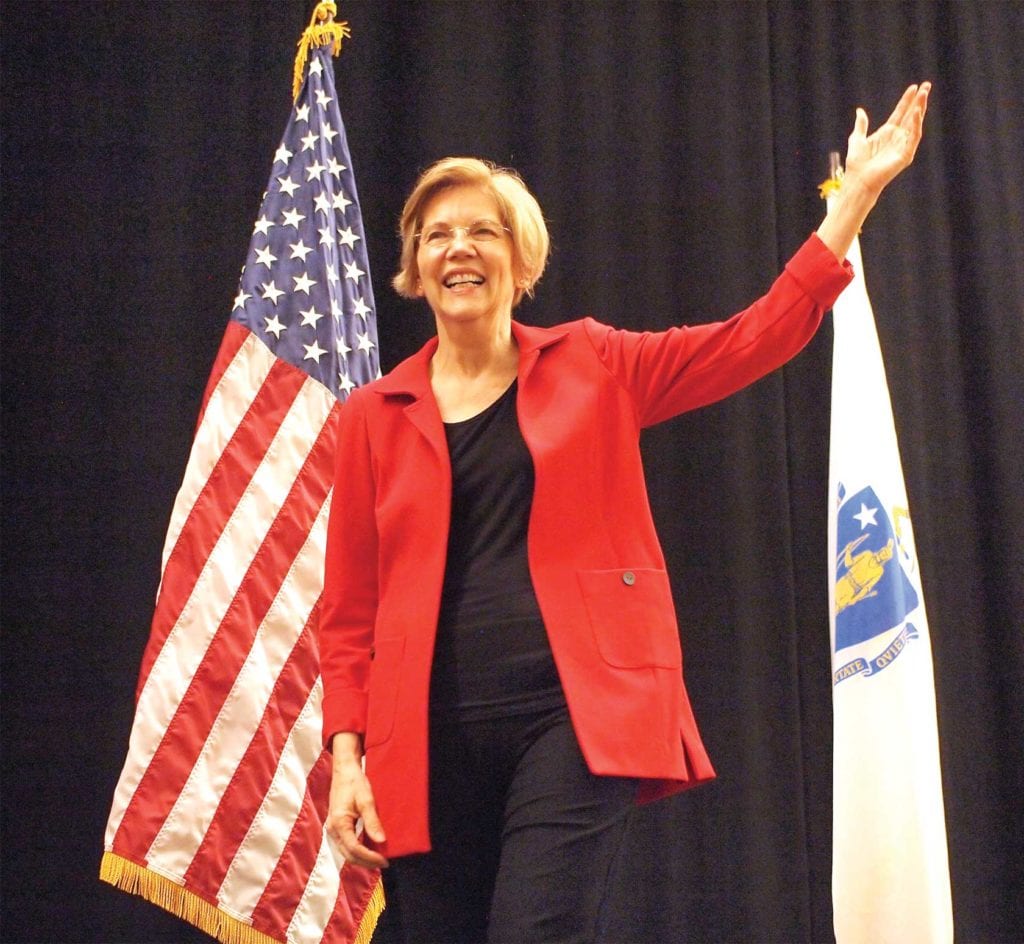 NEW HAMPSHIRE — In the week before the first-in-the-nation primary, words like “electibility” are heard time and again in bars, coffee shops, town halls and anywhere else that political events unfold in these parts.

Last Thursday night in Derry, though, around 200 people packed the Tupelo Music Hall hoping to hear more than just buzzwords. Chatter filled the room as a mixed crowd of students, retirees and Baby Boomers waited to hear from U.S. Sen. Elizabeth Warren (D-MA) at a get-out-the-vote event.

Many in attendance weren’t die-hard Warren supporters. Rather, most of the voters we met said they were still trying to make up their minds about who they believe can beat President Donald Trump in November’s general election.

Introduced by two campaign volunteers, Warren jumped on stage and told her life story, which she often describes as “anything but a straight-path story”—she went from high school debating, to earning a college scholarship, to dropping out to get married, to becoming a special education teacher and eventually going to law school and teaching at Harvard before entering politics in 2012, when she defeated incumbent Republican Sen. Scott Brown to become the Bay State’s first-ever female senator.

Warren then took up her central message of the evening, a rallying cry against corruption. Her plan, as she explains it, is to reshape the relationship between money and politics, a topic on the minds of many in the wake of Trump being acquitted in his Senate impeachment trial. The candidate said that the government works well, but only for those with a lot of money, and told the audience that the only way to fix things is to redirect the stream of money flowing through Washington—a move away from favoring campaign contributors, lobbyists, lawyers, PR firms, “bought-and-paid-for experts,” and think tanks.

Last October, Warren released an anti-corruption plan that calls for an end to lobbying as we know it. Warren’s way would ban presidents, vice presidents, members of Congress, federal judges and cabinet secretaries from lobbying—forever. The POTUS and VP would have to let go of their business interests and put investments into a blind trust to be sold—including assets that could present a conflict of interest. Members of Congress and senior congressional staffers would no longer be able to serve on corporate boards.

Moreover, Warren’s plan sets a path to tackle big money in politics: it proposes banning lobbyists from all fundraising activities and prohibiting politicians from accepting gifts or payments. It also restricts studies funded by groups with conflicts of interest from being considered in the rulemaking process, only allowing such reviews to be considered following a lengthy peer review process.

On stage in Derry, Warren listed a series of promises to make systemic changes in Washington, every one of them received with loud cheers.

“You really want to hose out some of the corruption in Washington?,” she asked the crowd. “Make every single person who runs for federal office put their tax returns online.”

“I do trust that she’s going to fight for us,” said Maryann Leonard-White, a New Hampshire voter at the event. “Some people don’t find her likable, but I do. She’s been building up on trust … We’re all in this together at this point.”

The event finished with Warren taking questions from the audience. In doing so, she vowed to protect and build on the Affordable Care Act, and to address the housing crisis with 2.5 million new units across the country—in cities as well as rural areas.

“The most important thing that we need to do to beat Donald Trump is unite as Democrats and not splinter,” said Peter Gallo, a Londonderry resident. “Whoever wins, I suggest that they pick a running mate from the top four Democrats. Imagine a Sanders-Warren ticket against Trump.”

This article was produced by the Boston Institute for Nonprofit Journalism as part of its Manchester Divided coverage of political activity around New Hampshire’s first-in-the-nation primary.

Local News
Cullinane will not run again in 12th
February 19th, 2020 >
GET THE
NEWS THAT YOU
CARE ABOUT
Members get access to a personalized news feed,
our newsletter and exclusive discounts on everything,
from shows to local restaurants — all for free!