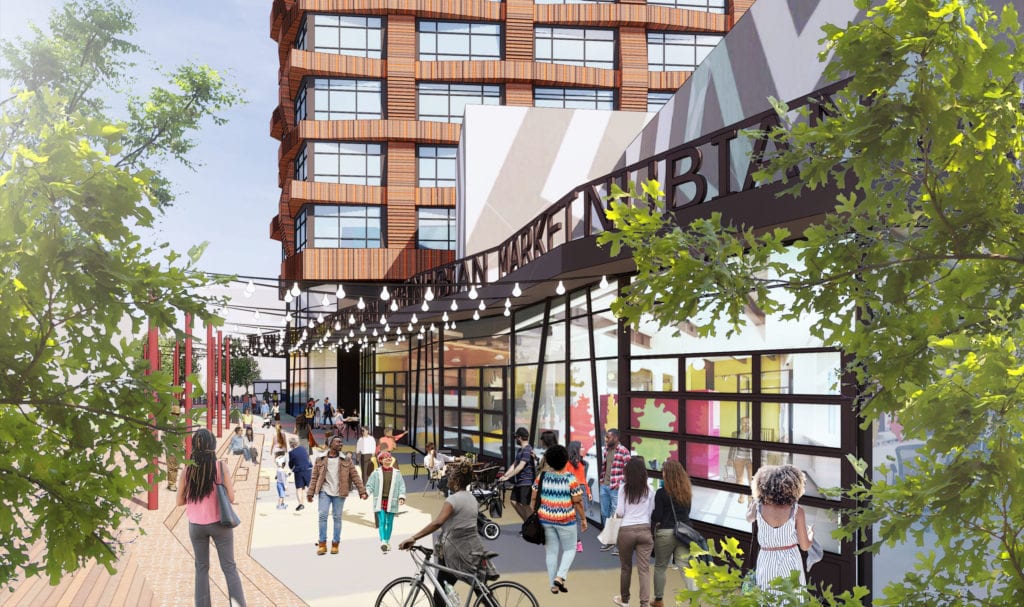 A rendering of the Nubian Square Ascends proposal. Courtesy photo

Two development teams have submitted bids of the redevelopment of the Blair Lot in Nubian Square. The two proposals present divergent visions for the long-vacant parcel, currently occupied by an 87,000-square-foot parking lot.

One group, Nubian Square Ascends, is calling for a 48,000-square-foot “Nubian Market” for artisans to sell wares. The project would also incorporate a food court affiliated with a culinary arts program, 135,000 square feet of office space over five floors, a 25,000 square-foot performance hall, 19,000 square feet for 20 artists’ residences, and a 340-car parking garage.

The other group, ID8, is proposing Nubian Crescent, a combination of housing, co-working office space, business incubator space and retail and community space, with underground parking. The housing units proposed would be two-thirds affordable and one-third market-rate. A crescent-shaped outdoor  community space would host community events. A rendering of the ID8 proposal for the Blair Lot as seen from Washington Street. IMAGE: COURTESY ID8

The ID8 proposal submitted to the Boston Planning and Development Agency, dated Feb. 19, provides fewer details than the Nubian Square Ascends plan and gives no numbers on how many housing units would be included in the plan.

The nearly two-acre Blair Lot, so called because until the 1980s it was home to the Blair’s Family Foodland supermarket, is currently used as a city parking lot with spaces for 94 cars. It is bounded by Washington, Palmer and Eustis Streets and Harrison Avenue. Along Washington Street, there are three buildings — including the former Hamill Gallery of African Art and the building currently occupied by Black Market — both of which are controlled by principals of the Nubian Square Ascends team. Aga’s Highland Tap is sited at the corner of Washington and Eustis streets.

The Nubian Ascends team consists of developer Richard Taylor, who owns the former Hamill Gallery building; Mario San Jacinto, whose Almiranta Capital, LLC firm is arranging the financing for the project; and Black Market Development LLC, headed by Kaidi and Chris Grant. The architectural firm listed on the proposal is DREAM Collaborative. Property management would be provided by Roxbury-based UHM Properties.

“The inspiration for this project has come from the work that Chris and Kai Grant have done with Black Market and the folks who established the Roxbury Cultural District,” Taylor told the Banner. “In order to support community-based small business, we needed to unleash the power of Nubian Square.”

Taylor said the parking garage is key to the growth of Nubian Square, given the recent increase in office space from the Bolling Building and planned developments including the proposed Rio Grande residential tower.

The Nubian Square Ascends project would include 20 owner-occupied artists residences.

“Artists in this city have been pushed around like vagabonds,” Taylor said.

The plan also calls for public art space, including on the walls of the parking garage and on the pavement around the buildings. Taylor said the team would dedicate $200,000 to local artists for public art projects in and around the square.

The ID8 team principals include Joseph Dabbah and Derek Dudley, both of ID8 Ventures — a development and property management firm. Dabbah, a Swiss native based out of New York, is a senior vice president at the Newark-based Emerita USA real estate development firm. Dudley is a manager for artists including hip-hop artist and actor Common. The team also includes the New York-based Loop Capital, a black-owned investment banking and advisory firm, Roxbury native and R&B star Michael Bivins and the Boston-based Shawmut Construction. The team also lists Boston-based publicist Kelley Chunn as a key member of the development team.

“We are looking forward to bring an affordable development with a program mix that will appeal to all,” Dabbah said in a statement sent to the Banner. “Programming in the Nubian Crescent Court will include open-air farmers’ markets that will dovetail well with the small local fare offered in the marketplace.”

Rodney Singleton, who sits on the project review committee for the redevelopment of Nubian Square parcels, said he is disappointed that just two developers submitted bids for the project.

“I wish we had more bids to look at,” he said. “I was hoping this would be more of a competition. I would have thought there would be at least half-a-dozen teams that would want to bid for those parcels.”