On Wednesday, Sept. 9, ArtsEmerson and Step Afrika! will recognize the 281st anniversary of the Stono Rebellion with the world premiere of “Stono.” The 30-minute digital theater piece brings a dynamic new layer to Step Afrika!’s oeuvre of stage-based performances. 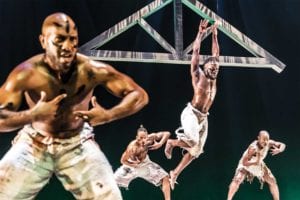 The Stono Rebellion of 1739 was the largest uprising of enslaved peoples in North America, when a group of enslaved African people marched from South Carolina toward Florida. What followed was The Negro Act of 1740 that banned enslaved people from a number of activities, including assembling in groups and using drums. That didn’t stop the music. It gave rise to the use of bodies as percussive instruments, of chants as background percussion and movements that would later become stepping, a percussive dance that paved the way for modern hip-hop dances. In “Stono,” Step Afrika! harnesses these same resources to tell the story.

“Although the Stono Rebellion was suppressed, this little-known event in American history forever changed African American life and culture,” says Step Afrika!’s artist statement. “’Stono’ will honor the spirit of resistance and activism that remains a critical part of American freedom.” C. Brian Williams, Step Afrika!’s founder and executive director, pioneered the piece with the support of the Hancher Auditorium at the University of Iowa, ArtsEmerson and a number of other organizations.

Step Afrika! is the first formal company in the world dedicated to the art of stepping. It is the manifestation of an artistic legacy carried on from Black colleges in the early 1900s to stages in more than 50 countries around the globe. In fact, Step Afrika! is one of the top 10 African American dance groups in the United States. The group blends these historically African American movements and music with traditional South and West African dances, contemporary styles, storytelling and acrobatics.

Both events will be streamed on Facebook and YouTube. Although the programs are free with advance registration, audience members are encouraged to donate to Step Afrika! to support further virtual work during COVID-19.