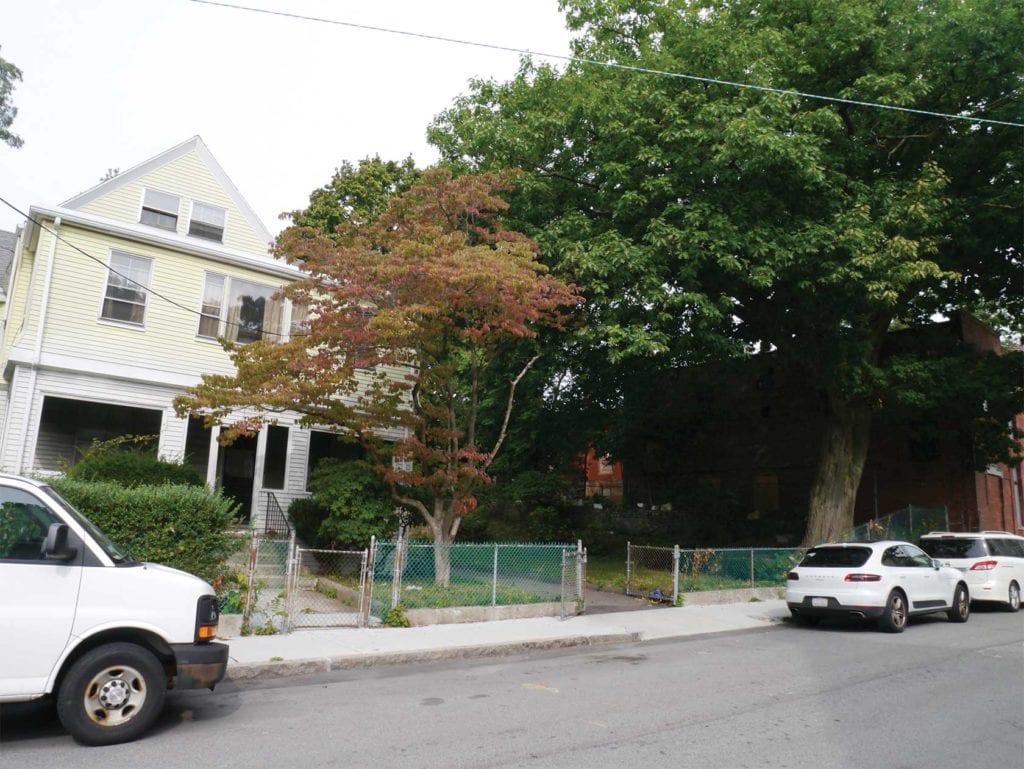 A developer is seeking six variances to increase this home on Harrishof Street from two families to three and build six additional units on the same lot. BANNER PHOTO

On Harrishof Street in Roxbury, developer Tim Longden is proposing converting a two-unit building into three units and constructing an additional six units on the same parcel. On Magnolia Street in Dorchester, RAS Development LLC principal Rokeya Begum is proposing a 35-unit development on a parcel where currently there are 12 garage bays. A mile or so away at 71 Ruthven Street, a development firm owned by Pervin Choudhury is constructing a three-story apartment building directly behind a pair of three-family homes.

A small army of developers is altering the fabric of Roxbury, Dorchester and Mattapan in defiance of a zoning code that some argue was meant to protect abutters from the excesses of speculative real estate development. In case after case, developers are pushing past the previously set limits on building height and density.

“The people’s voice is not critical to the process,” said Highland Park Neighborhood Coalition member Rodney Singleton. “If you have a lawyer who knows how to game the system, the chances are very good they’ll get their project through. It’s not a level playing field.” A three-story building goes up behind 71 Ruthven Street. Banner photo

While the coronavirus epidemic and the resulting stay-at-home order and economic slowdown slowed the pace of real estate development during the spring and early summer, the pace has picked up again, and with it, concerns about the city’s development process.

In August, the City Council voted to block two of Mayor Martin Walsh’s appointments to the Zoning Board of Appeal, over concerns those members were not representative of the community. In July, the council passed an ordinance filed by District 1 Councilor Lydia Edwards mandating representation on the board from planning experts and community residents. The ZBA’s current makeup includes seats for members who represent the construction and real estate industries, an arrangement some say has led to conflicts of interest.

Last year, ZBA member Craig Galvin left the zoning board after reports surfaced that he had served as a broker for properties for which he had voted in favor of zoning variances. Also last year, a Boston Planning and Development Agency official pled guilty to accepting $50,000 bribe to influence a ZBA vote on variances for a project. Soon after, former Inspectional Services Division Director William “Buddy” Christopher took an unpaid leave of absence from his job as a special advisor to the mayor.

The scandals and fallout put public focus on the city’s development processes.

The city has strict codes that determine the height, number of units, parking spaces and size of real estate developments in different neighborhoods, but developers regularly appear before the ZBA to seek variances that allow them to exceed the limits set by zoning codes.

While the zoning codes were often set as part of planning processes ironed out by community residents to create a vision for future development in their sections of the city, neighborhood activists say developers are now routinely obtaining variances that put new buildings at odds with communities’ visions for their neighborhoods.

The rapid pace of individual projects in residential areas contrasts sharply with development planning processes run by the BPDA that govern large parcels of public land in Roxbury.

“In Nubian Square there are lots of projects on city-owned land that are vetted through impact advisory groups,” said Lorraine Payne Wheeler, who heads the neighborhood organization Roxbury Path Forward. “But we have all these small developers who are putting up building after building.”

A block from Singleton’s Cedar Street home, attorney Derric Small obtained a variance to build a single-family home on an 1,800-square-foot lot — far smaller than the 4,000-square-foot threshold required for a lot to be considered buildable in the neighborhood. Small, who formerly worked for the city’s Inspectional Services Department, manages a limited liability corporation that purchased the parcel in July of 2018 for $49,000. After obtaining variances over the objections of neighbors, Small’s LLC sold the lot to 0 Walnut Lane LLC for $277,000. The firm built a single-family home on the lot that sold Sept. 3 for $995,000, according to the real estate database company Zillow.

Singleton said the deal was one of many in the neighborhood where the ZBA sided with developers against the abutters.

“If the ZBA leans in either direction, it should be toward protecting the quality of life in the city of Boston,” he said. “Developers can’t just come in and create negative externalities that impact the abutters.”

Half-a-mile away on Harrishof Street, Longden is seeking six variances for the nine units he plans to develop. While abutter Dawna Thomas says every resident on the block opposes the project, she has no illusions that the city will deny Longden his six variances.

“We’re seeing this all over Roxbury,” she said. “Developers are going to the ZBA, getting zoning variances and over-developing the area. How can the zoning board keep going against the residents and keep approving projects that nobody wants? It’s as if we have no say.”

Across the city, residents complain that developers are doing just that — erecting new buildings that block sunlight, add density and permanently alter the character of neighborhoods.

Developers and ZBA vs. residents

“Fundamentally, we are still operating off of the laws that bypass community authority,” she said.

Because so many development decisions are being made by ZBA variances, Wu argues, the board must be more representative.

“Effectively, the ZBA has become the planning board for the city, and it’s facilitating displacement across the city, especially in communities of color,” she said. “Residents are having to organize on their own volunteer time against developers who have the resources to get through the system and have paid to hire consultants and lawyers who can smooth their way.”

Last year, Wu and District 4 Councilor Andrea Campbell joined abutters of 52 and 54 River Street in a demonstration against developers who have constructed large, multi-unit condominium buildings on lots formerly occupied by one- and two-family homes.

For those projects, the city’s Inspectional Services Division and ZBA ruled in favor of the developers despite abutters complaints about shadows cast by the proposed buildings, lack of setbacks, the absence of frontage on a public way and the density of the projects. While any of those challenges could derail a project, the 52-54 River St. developments are moving ahead, with one building completed and another under construction.

Susan Lombardi-Verticelli, who with her neighbors has been fighting the River Street projects for three years, said the process has left her disillusioned.

“It makes me angry with my city, and I don’t want to be,” she said. “What local government is telling us is that we don’t matter. At every turn in the process we’ve noted how the process is flawed. They’re telling us not to believe what we’re seeing with our own eyes.”