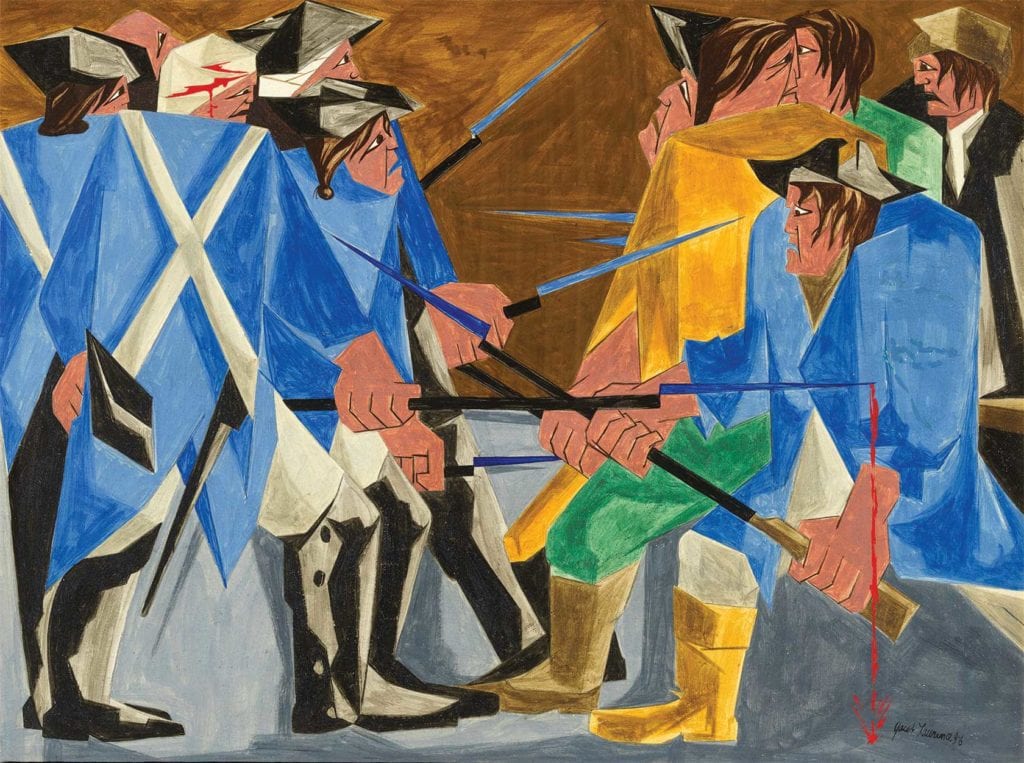 Jacob Lawrence, “There are combustibles in every State, which a spark might set fire to. — Washington, 26 December 1786,” Panel 16, 1956, from Struggle: From the History of the American People, 1954–56. Private Collection. © The Jacob and Gwendolyn Knight Lawrence Foundation, Seattle/Artists Rights Society (ARS), New York Photo by Anna-Marie Kellen

Missing for 60 years, one of the paintings in Jacob Lawrence’s 30-panel series “Struggle: From the History of the American People” (1954-56), has been found, thanks to an alert museum visitor.

The series, a powerful portrayal of democracy in the making by Jacob Lawrence (1917-2000), one of America’s most important modernist figurative painters, was last presented intact in 1958, at a New York gallery.

On view through Sunday at the Metropolitan Museum of Art in New York, the exhibition that reunites this series opens on November 20 at the Birmingham Museum of Art and travels next to the Seattle Art Museum to conclude at the Phillips Collection in Washington, DC.

Entitled “Jacob Lawrence: The American Struggle,” the exhibition debuted from January through April at the Peabody Essex Museum, which organized it. Its curators and catalog editors are Elizabeth Hutton Turner, Professor of Modern Art at the University of Virginia, and Austen Barron Bailly, former PEM curator of American art and now chief curator, Crystal Bridges Museum of American Art.

In June, the exhibition moved to the Met, where a visitor connected the panels’ autumnal palette, shard-like shapes, contorted angles and historic content to a painting she had seen in her neighbors’ Upper West Side apartment. She informed her friends, an elderly couple, who contacted the museum. The Met swiftly confirmed the provenance of the painting, which the couple had purchased in 1960 for a small sum at a Christmas art auction.

At age 23, Lawrence had already produced a masterpiece — his 60-panel “Migration Series” (1940-41), an epic rendering of the African-American exodus from the Jim Crow South to pursue opportunity in the north. The Museum of Modern Art and the Phillips Gallery quickly co- purchased the work, the first by a Black artist to enter the then-segregated mainstream art world.

A decade later, describing his ambitious new project, Lawrence wrote, “The paintings which I propose to do will depict the struggles of a people to create a nation and their attempt to build a democracy.”

In “Struggle,” Lawrence renders actual events and its captions quote eye-witness accounts.  He drew the quotes from speeches, reports, and letters he found at the 135th Street  Branch of the New York Public Library in Harlem, now home of the Schomburg Center for Research in Black Culture. With an eye for the underrepresented, overlooked, and unsung, Lawrence chose texts and rendered images that shed light on the resolve and sacrifices of ordinary men and women, including enslaved and indigenous Americans.

Its 30 panels and captions were last exhibited together in 1958 at a New York gallery. Unable to find a buyer for the entire series, Lawrence’s gallery ended up selling its panels piecemeal, to assorted buyers.

In organizing this exhibition, six years in the making, the co-curators reassembled the series, both the panels and their captions, as Lawrence had fashioned it. In his caption for Panel 16, which the curators found in a brochure from the New York gallery, Lawrence quotes a letter from George Washington, then a retired general, on the need for stronger federal government. The panel depicts an armed uprising in Springfield, MA by Revolutionary War veterans whose farms were being repossessed by the state to replenish its war-depleted coffers. The rebellion spurred the writing of the U.S. Constitution, an arduous feat that Lawrence renders in the preceding panel.

In Panel 16, both farmers and soldiers are exhausted, not unlike today’s Americans as they wearily and warily take on the choice of a president in a polarized nation.As Lawrence depicts in “Struggle,” building a democracy is an ever-unfolding story.