A year that transformed policing in Massachusetts For decades, Black elected officials and community activists sought reforms to Massachusetts police departments they said discriminated against Black and Latino people by engaging in racial profiling, acts of police brutality and violations of public trust. For decades, legislative leaders, mayors and others in positions of power blocked or opposed even incremental reforms. This year, those familiar dynamics were disrupted as protests broke out across the country following the high-profile police murders of Breonna Taylor in Louisville and George Floyd in Minneapolis. The protest movement, impossible to ignore, bolstered efforts to change the way police are trained, scrutinized and disciplined.

In Boston, District 4 City Councilor Andrea Campbell in January introduced a hearing order to investigate the city’s Community Ombudsman Oversight Panel, the group that for years has stood as Boston’s substitute for a civilian review board. The body, which had limited power to review police department investigations into officers’ misconduct, had dwindled down to one member and had not released a public report in the preceding two years. Black elected officials had long called for the formation of a civilian review board with the power to subpoena officers and conduct investigations, a measure that was called for in the 1992 St. Clair Commission Report, released in the aftermath of public outcry over rampant police abuse of blacks during the 1989 Charles Stuart case.

The measure was long opposed by Mayor Martin Walsh, former Mayor Thomas Menino and a majority of the white members of the City Council.

Similarly, calls for police reforms at the state level by members of the Massachusetts Black and Latino Legislative Caucus met headwinds of resistance from State House leadership.

The May 25 murder of George Floyd by Minneapolis police changed up the political equation like no other event in recent memory. Streets emptied by the global coronavirus pandemic were suddenly filled with demonstrators. In Boston, a May 31 demonstration was punctuated by looting and property damage that occurred after the organized protest, along with acts of indiscriminate violence by Boston police officers that appeared to shake civic leaders out of decades of complacency. A demonstration in Peters Park in the South End. BANNER PHOTO

Suddenly, as Black and Latino elected officials, criminal justice reformers and ordinary citizens called for change, the white elected officials who for years resisted them were gripped by a national moment of racial reckoning. The reckoning was fed in part by four years of racially divisive rhetoric at the national level that left many white Americans pondering the racial inequities that color nearly every aspect of American life.

At the same, police organizations found themselves in conflict with elected officials, educators, media outlets and rights activists during demonstrations and amid investigations into police misconduct by local and national news media. Here are some of the events over the course of 2020:

• Throughout the year, news media investigated and reported on a Massachusetts State Police scandal in which officers claimed overtime for hours not worked and the department apparently tried to cover their malfeasance.

• The Boston Police Patrolman’s Association in February launched a broadside against the Boston Teachers Union’s incorporation of Black Lives Matter into their curriculum, with former BPPA President Michael Leary arguing that the Black Lives Matter movement had “the effect of making my members less safe.” Public defenders demonstrate across from the Boston Police Area B2 substation. BANNER PHOTO

• In June, amid nationwide calls to “defund the police,” local activists called on Walsh to make a 10% cut to the Boston Police Department’s $414 million budget and reinvest the $41 million in funds in youth programming and social services. After Walsh included a largely symbolic $12 million cut to the department’s overtime budget, a majority of the City Council’s Black and Latino members, as well as the sole Asian member, voted against the budget.

• The Banner reported in June and July on police court overtime records and found that officers in some cases appear to be collecting court overtime while also on duty, in violation of department regulations.

• The Boston Globe reported in October that Black officers receive discipline, including suspensions and terminations, at more than twice the rate white officers do.

• In November, the Globe reported on police officers who have engaged in criminal misconduct, including driving under the influence, yet are never charged with crimes. 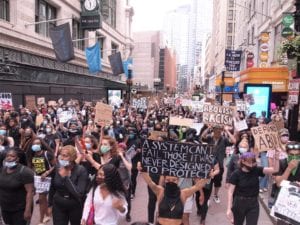 • In December, the news website The Appeal posted body camera footage from the hours after the May 31 Boston demonstration that appeared to show officers using batons and pepper spray on members of the public with little or no provocation. In one snippet of video, an officer laughs while admitting to running down demonstrators with his vehicle. In another, an officer appears to pocket a $50 tie that had been stolen from a downtown store.

These incidents and reports reflect what appears to be changing perceptions of police and, more importantly, a changing relationship between police officers, police departments and their unions and the civil society in which they operate.

Some of these shifts were codified in new laws this year.

In November, Walsh signed an executive order creating the city’s first-ever independent civilian review board. While the mayor’s plans for the board differed somewhat from a proposal being advanced in the council, both sides were able to iron out a compromise within weeks.

To criminal justice reform activists, the changes to policing made at City Hall and the State House represent progress in a decades-long fight to change the way Black and Latino people Massachusetts are policed. The reforms pushed through in 2020 promise to bring more transparency and accountability to policing in Massachusetts and could bring significant changes to the way police interact with the public.