Not the usual suspects Wayne Ysaguirre, 55, was no stranger to exercise. When the Roxbury YMCA opened at 5 a.m., he was one of the first through the doors. He had a routine — an hour and a half of aerobics on one of the Y’s exercise machines. He at first ignored the pain in his chest that occurred when he picked up the pace of his workout. Since the pain subsided when he slowed a bit, it was not serious, he reasoned.

That went on for a couple of days. The third day was a different story, however. This time the pain did not subside, and it was paired with clamminess and sweating. When his wife found him doubled up on the sofa, the emergency room was their next stop.

His EKG was normal, but the blood test was suggestive of a heart attack. A catheterization that provides an image of the heart’s circulation, told the tale. Three arteries in his heart were 95% blocked, Ysaguirre explained.

He had two choices — a stent to prop open the arteries, or a coronary bypass, which is surgery that routes the blood around the blocked passages. His cardiologist explained that stents would work if Ysaguirre made certain lifestyle changes.

What he learned was eye-opening. 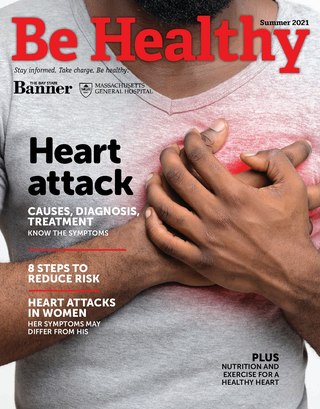 Ysaguirre did not have the usual risk factors for a heart attack. Even his age did not fit. The average age is 65, according to Heart Health, a publication of Harvard Medical School. He was 47 at the time. The young age suggests a genetic link, but it did not apply in this case. He had quit smoking years before. Smoking is typically associated with cancer, but it damages the inside of arteries as well.

He had no history of high blood pressure, diabetes or cholesterol. But there are two risk factors that in all probability were the culprits behind his attack. It was a rude awakening to Ysaguirre to learn that he had obesity. “It was shaming,” he confessed. His BMI was 34.4. A measure of 30 or higher is classified as obese. The other factor was his eating style. “I ate too much,” he admitted. “There was no signal to my brain to stop,” referring to the brain-gut connection that sends a signal when an individual’s hunger has been satisfied.

Stress may have played a role as well. He was the CEO of a nonprofit. His job was demanding and non-stop. He reasoned that food may have been a way of calming him. Unfortunately, the food he ate was loaded with fats and sodium.

Since his heart attack, Ysaguirre has had a “Come to Jesus” experience, and has made significant changes in lifestyle. He participated in a cardiac rehab program. The physical therapist helped him understand the strong connection between heart health and physical activity.

He made three seemingly minor changes — small steps but a huge impact. First he downsized his food plate from 12 to nine inches.  According to a study from Cornell University, the bigger the plate, the bigger the portions. Large plates and bowls tend to make servings look smaller, so people compensate by filling up the empty spaces. The study suggested that smaller plates help a person eat less but still feel satisfied. It’s a way of tricking the brain.

The other change is what he puts on that plate — a protein and two veggies.  Knowing his penchant for over-eating, his cardiologist offered advice. “Overeat salads,” he advised, “and eat the salads first.”

What surprised him the most was his change in taste for sodium. He stopped eating out. Restaurants offer not only large portion sizes but also foods high in sodium. According to the Centers for Disease Control and Prevention, 71 percent of the sodium Americans consume comes from packaged, processed, store-bought, and restaurant foods. Surprisingly, only 6 percent comes from salt added during cooking or at the table. That change took some getting use to. Food at first had no flavor, but that that lasted about a week. He knew he had arrived when he ordered curried goat – one of his favorite dishes. “I thought I was just eating salt,” he said.

It’s been eight years, and the changes he made seem to be the right ones. His weight is down; his palate is more refined. His follow-up appointments with his cardiologist are now yearly instead of every six months. He’s back in the gym.

And no more chest pains.