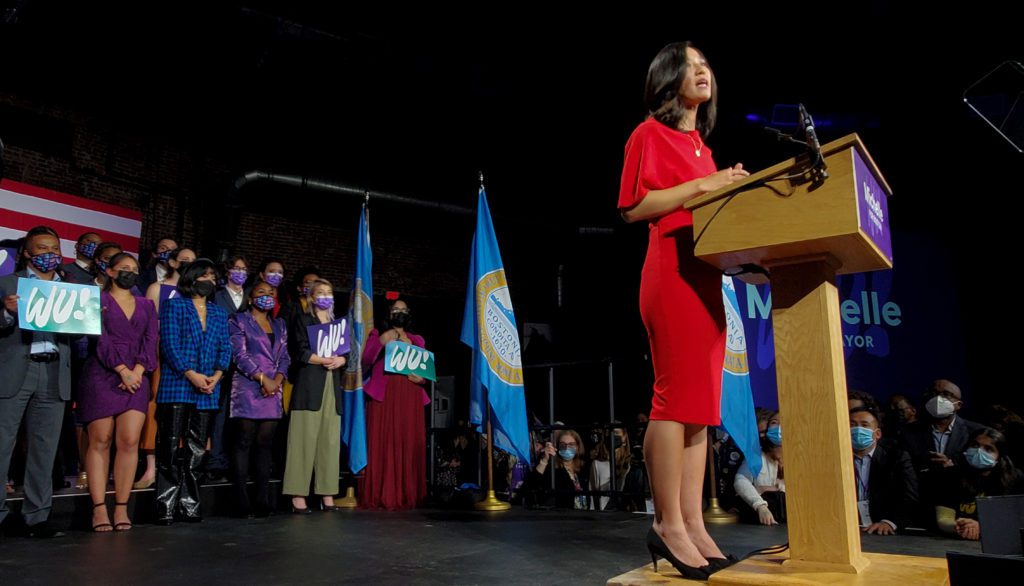 Michelle Wu made history on Tuesday night as the first woman and first person of color to be elected as Boston’s mayor. Amid hundreds of supporters and campaign staff in the Cyclorama at the Boston Center for the Arts on Tremont Street, Wu acknowledged the powerful symbolism of her win, while promising real change across the city.

“One of my sons asked me the other night if boys can be elected mayor of Boston,” Wu told the cheering crowd. “They have been, and they will again someday, but not tonight.”

She went on to say, “What we deserve is a Boston where all of us are seen, heard, treasured and valued.”

Wu told the room of her plans to create equitable schools, provide mental health care to those struggling with addiction across the city, to support small businesses — especially those owned by Black Bostonians — and to make Boston a Green New Deal city.

In her acceptance speech and throughout her campaign, Wu has positioned herself as a progressive with big ideas while promising city residents that those won’t interfere with smaller goals. She received continued skepticism from opponent Annissa Essaibi George about her ability to enact lofty ideals. Essaibi George ran a campaign based on pragmatism that in the end, did not win over the white progressive and Black and Latino voters necessary to win.

As she addressed those gathered to celebrate her victory, Wu told those listening that “Boston has always been that city that punches above its weight.”

State Rep. Aaron Michlewitz, who introduced Wu on stage, said of Michelle’s platform, “She has shown us that it’s not only OK to think big, but also that it’s OK to think outside the box. That it is also necessary in these turbulent times.” He continued, “Michelle has proven that she is willing to look, listen and do the work necessary to get things done.”

“She’s never failed to stand up for workers fighting for better wages, health insurance, retirement benefits and safe working conditions. Michelle understands the working class is too often overlooked and she will fight for blue-collar workers and their families,” O’Brien’s statement says.

Wu finished election night just over 23 points ahead of Essaibi George with 79,763 ballots cast in her favor, according to early results, which don’t include mail-in ballots. Only 127,700 ballots were cast for either candidate –– less than 30% of the city’s eligible voting population.

Annamarie Why, who held signs for Michelle not only on Election Day but multiple times throughout the summer in Brighton’s Oak Square, said despite the low turnout, “We got really positive feedback from the cars, from people waving and honking and bus drivers, and it was very exciting.” She said she was “thrilled” after Wu gave her victory speech and that she thinks the new mayor will hit the ground running.

Sarah Anders, communications manager for the Wu campaign, recalled similar feelings throughout Election Day, saying there was “great energy on the ground and excitement, an appetite for change and for the vision that she’s putting forward.”

Wu is a Chicago-born daughter of Taiwanese immigrants who moved to Boston to attend Harvard University. She will come into her new role as mayor after eight years on the City Council. She was the first Asian American woman to serve on the council and in 2016 was the first woman of color to serve as council president.

In her concession speech, Essaibi George offered congratulations to her opponent after a long, hard-fought race.

“She is the first woman and first person of color. And as an Asian American –– the first elected to the mayor of Boston –– I know this is no small feat. I want her to show the city how mothers get it done,” she said.

Election night ended with optimism radiating from the Wu train. Michlewitz captured the feeling on stage.

“Today we start a new chapter in that history,” he said. “A chapter that’s never been written before. A chapter of inclusiveness, of collaboration and of determination.”

However, he added, the work could wait until after celebration.

Wu agreed, saying “Let’s celebrate tonight, and tomorrow we’ll continue the work together,” followed by an explosion of purple confetti.