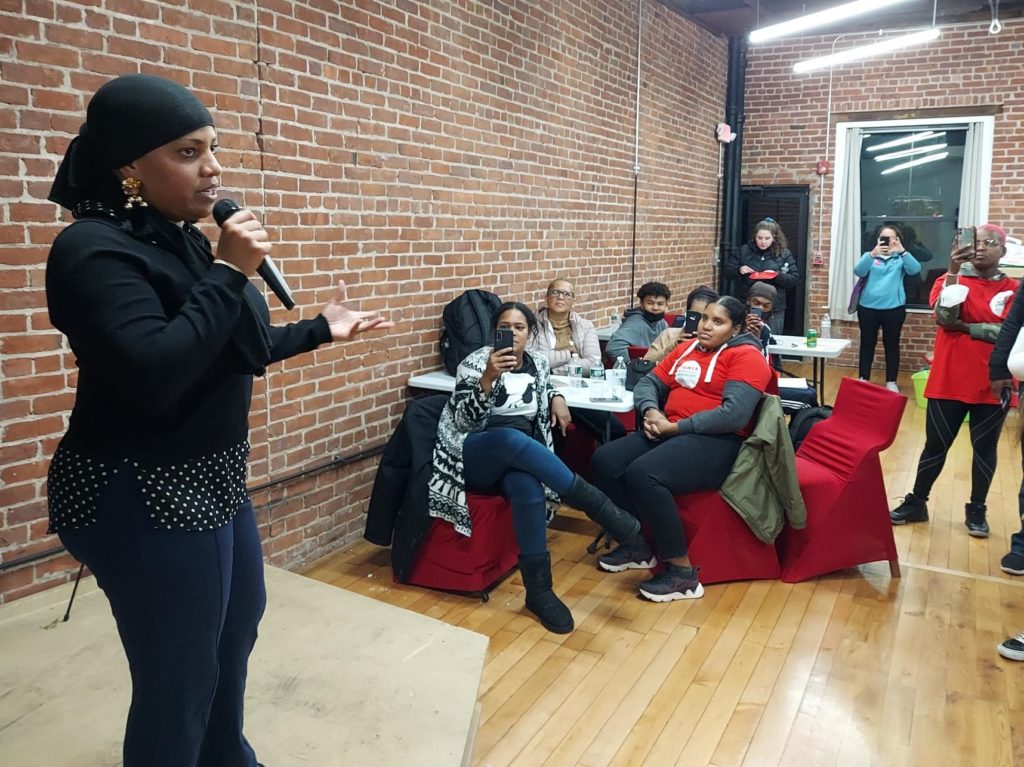 As the results from precincts across District 7 trickled into her Nubian Square campaign office, Tania Fernandes Anderson took to the stage to acknowledge what had long seemed like a forgone conclusion: She had handily defeated perennial candidate Roy Owens, the unconventional Roxbury minister whose anti-Muslim rhetoric failed to sway voters.

While Anderson delivered a low-key address, thanking campaign volunteers and voters, the historic nature of her election was not lost on her supporters.

For Anderson, her campaign victory is a source of pride for her sons, ages 15 and 22, whom she has raised as a single mother.

“My sons can look up to me and say, my mom did that,” she told the Banner. “She came from extreme poverty and homelessness, and she did this. I’m very happy. I am going to be the person who is going to connect with so many other people. I’m going to be the one  who possibly, if I dare say, can bring people together. This is an amazing opportunity to help so many people. I’m overjoyed by that.”

While Boston Election Department officials had not yet finished counting mail-in and early voting ballots Tuesday night, Anderson with 7,017 votes to Owens’ 2,550 votes in the city’s unofficial results.

Anderson said attacks from Owens, who accused her of supporting Sharia law and excoriated her for supporting abortion rights and same-sex marriage, did not bother her.

“It didn’t affect me emotionally at all,” she said. “In my religious practice, we’re taught to be patient, to be compassionate until people are cured of their ignorance.”

Anderson was born in Cape Verde and grew up in Roxbury, living in the Academy Homes public housing development.

She says that she may revisit the anti-Muslim and anti-gay sentiment Owens expressed during the campaign in the months following her election to the seat.

“I’m still thinking of addressing it,” she said. “It’s a learning opportunity for the community at large.”

Anderson told the Banner she planned to focus first on boosting civic engagement in District 7.

“If people are more engaged with city government, they’d be better able to manage city resources,” she said. “We could put power back in people’s hands.”

Anderson said voters she spoke with on the campaign trail expressed concern about the cost of housing in Boston, the congregation of homeless people at Massachusetts Avenue and Melnea Cass Boulevard, gun violence in the community and education.

She’s not the only District 7 candidate who wants to boost civic engagement. Marisa Coleman Luse and Brandy Brooks, both of whom ran in the preliminary, said they were also interested in engaging District 7 residents. Seated in Anderson’s Nubian Square office during the victory party, the pair discussed the lack of voter participation in Roxbury.

“We realized we need to focus on getting the vote out,” Luse said.

“And focus on staying engaged,” Brooks added. “Staying active after the election. There are 41,000 registered voters.”

“And we’re getting just 8,000 voters turning out,” Luse said. “We need people to stay engaged.”

Asked whether she would join her former rivals in boosting civic engagement, Anderson said, “If they want me to.”

Anderson works as the executive director of the Bowdoin Geneva Street Main Streets district. In her spare time, she enjoys fashion design. In 2019, she led a masquerade band in Caribbean Carnival with the theme, “Children of Wakanda,” an artistic endeavor she hopes to repeat next year.

“I saw Ms. Shirley [Shillingford] today,” she said, referring to the president of the Caribbean American Carnival Association of Boston. “I already told her.”