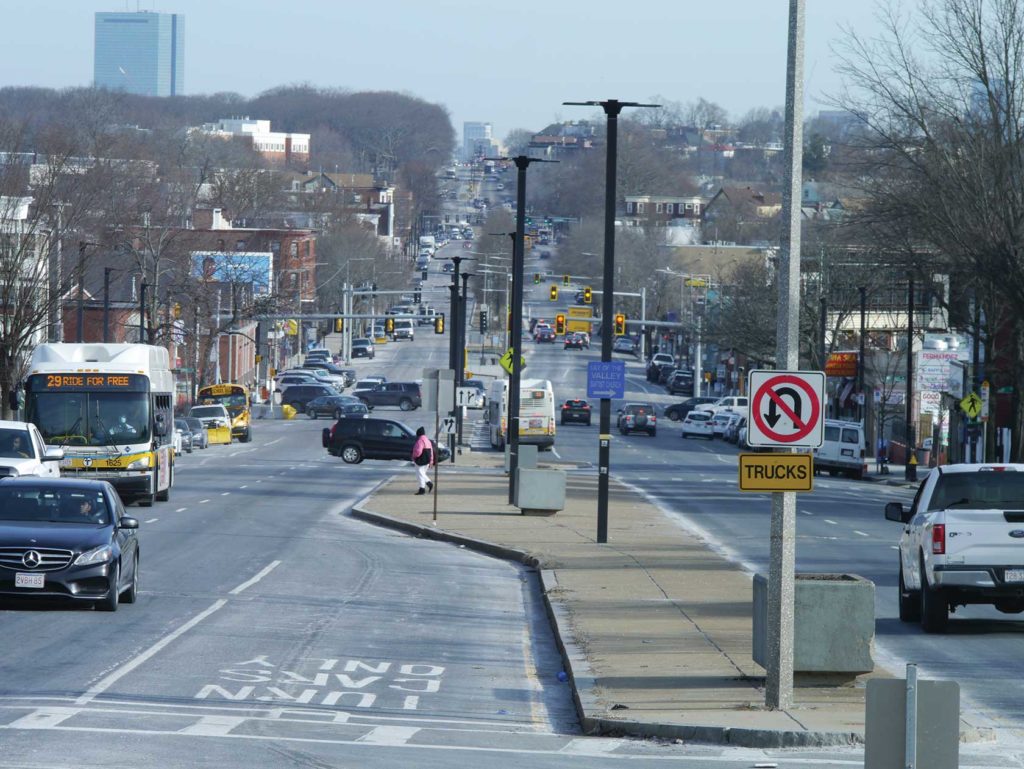 City officials expect to start planning on a redesign of a three-mile stretch of Blue Hill Avenue within a month and a half. BANNER PHOTO

City officials are planning a series of meetings for the reconstruction of a three-mile stretch of Blue Hill Avenue that promises profound changes to the way people travel on the thoroughfare.

After a year-long planning process, months of construction and as much as $60 million in investment, the avenue will likely have a center-running bus lane, protected bike lanes and crosswalks markedly safer than the current expanses of painted asphalt that span up to 110 feet.

The aim of the project is to make the corridor, stretching from the Mattapan Station rail and bus stop to the avenue’s intersection with Warren Street, safer for pedestrians and cyclists and to reduce travel times for the bus riders who make up the more than 50% of those traveling the route during peak traffic hours.

Jascha Franklin-Hodge, the city’s chief of streets, transportation and sanitation, notes that Black Bostonians, who make up the majority of Mattapan’s population, spend on average 64 more hours on commute times each year than do white Bostonians.

“It has profound consequences for people’s days,” he said. “There are substantial delays on Blue Hill Avenue. We see riders experiencing delays of up to 25 minutes in each direction.”

The design, which city planners hope to work out through meetings with neighborhood residents, business owners and other stakeholders, would likely be similar to that of the redesigned portion of Columbus Avenue between Walnut Avenue and Jackson Square, with narrower crosswalks and protected bus stations placed along the center bus lanes.

Auto traffic could be reduced to one lane in each direction in some portions of the roadway, with allowances for left-turn lanes. If the newly-opened center-running bus lanes on Columbus Avenue are any indication, Blue Hill Avenue could also lose some on-street parking spaces, a change that could have an impact on local businesses.

Franklin-Hodge says the benefits to the thousands of commuters and shoppers who rely on buses outweigh potential negatives.

“We see this as a place where we can make a tremendous difference for a community that is disproportionately burdened with the challenges of commuting right now,” he said. “I think that the first order of business here is to say, ‘How can we redesign this in a way that allows the bus to work better for the people who rely on it here?’” A separate phase of planning, for the section of Blue Hill Avenue between River Street and the Mattapan MBTA station, is already underway. In that phase, neighborhood residents are exploring options such as allowing southbound buses the option of turning left into Mattapan Station, rather than the current route, which crosses over into Milton before buses can make a U-turn back to the station.

The Mattapan Square planning is also looking at ways to reduce the width of the River Street intersection to make it easier for pedestrians to traverse.

“There is no crossing Blue Hill Avenue from one side of River Street to the other,” said Fatima Ali Salaam, president of the Greater Mattapan Neighborhood Council, noting that pedestrians exiting Mattapan Station currently must traverse two crosswalks on River Street, cross Blue Hill Avenue, and then Cummins Highway before reaching River Street. “It’s hopscotch.”

While businesses in Mattapan Square — and throughout the length of the avenue — have expressed concerns about the loss of on-street parking spaces that will accompany the expanded crosswalks and bus and bike infrastructure, Ali-Salaam said reaction so far has been mixed.

“A lot of engagement has to happen with Blue Hill Avenue,” she said. “There’s a lot of trust-building that needs to happen.”

Franklin-Hodge says community meetings with city officials, MBTA officials and community members will take place over the next year. The city has contracted with the firm Grayscale Partners to coordinate facilitation of meetings with neighborhood groups along the three-mile route.

Johnson said another advantage to the redesign is that it would make the avenue safer for drivers, cyclists and pedestrians.

“It’s one of the corridors with the most accidents in Boston,” he said.

Franklin-Hodge says the majority of injuries on Blue Hill Avenue are to drivers. Dedicated turn lanes, narrower intersections and other changes will likely lower speeds and reduce accidents.

The section of Blue Hill Avenue undergoing redesign now has two-to-three travel lanes in each direction and a median strip. Until the 1950s, the roadway accommodated a trolley line running along the center.

The redesign will be partially funded with $15 million in federal funding that U.S. Rep. Ayanna Pressley helped secure. City and state funds will pay for the rest of the project, which city officials estimate will cost between $40 million and $60 million.

Johnson says center-running bus lines are an important strategy to cut down commute times in Boston. Other streets he says could benefit from such lanes include Melnea Cass Boulevard and Columbus Avenue between Jackson Square and Ruggles Street.

Bus riders have given the existing Columbus Avenue infrastructure the thumbs-up, he says.

“People say they love the shelters,” he said. “They love that it’s safer to cross the street.”