‘Dear Remedios…’ — A love letter to an artist, written in Flamenco dance Art historian, Flamenco dancer and cinematographer María Aliaga fell in love with the painter Remedios Varo 10 years ago. After a decade of research and creative devotion, she has channeled her feelings into a performative letter to the artist. “Querida Remedios” is a love letter written in Flamenco dance from Aliaga to Varo, and on Dec. 1, audiences can experience it on film at the Dance Complex in Cambridge.

“Her paintings are like magic scenes that talk about these magical characters that are doing fantastic things,” says Aliaga. “They were like big stories told only in one image.” In creating this piece, Aliaga chose 13 of her favorite paintings and created a narrative story connecting them all. That story, inspired by and celebrating Varo’s values and artworks, is what she tells in her performance. Aliaga also felt a personal connection to the artist. Varo was Spanish but came to Mexico as a refugee during World War II and was there until her death in 1963. Most of her body of work was created there. Aliaga is from Mexico and feels a kinship with the artist who was so inspired by her homeland. To bring the relationship full circle, Aliaga specializes in the Spanish dance form Flamenco.

Varo was a talented surrealist painter but also a champion of women’s rights. She was one of the first women accepted to study at the San Fernando Royal Academy of Fine Arts in Madrid, and she flourished in her art career at a time when male artists dominated the field. Varo lived all over the world, was married three times and painted scenes of women doing extraordinary tasks. She lived as she pleased when that was nearly impossible for women to do.

“I found in all my research a very big universe of Remedios,” says Aliaga. “Art history is a way to understand history through the eyes of the artists.” Surrealism is typically associated with artists like Salvador Dalí and René Magritte, but works by Varo, Frida Kahlo and other female artists working at the time deepen the art historical understanding of that moment. 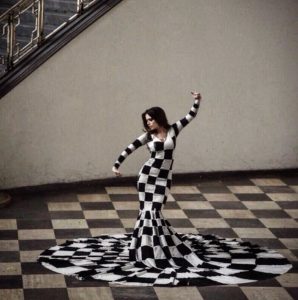 Feminism is one way Aliaga connects Varo’s work with the modern world, but it’s certainly not the only one. Migration and refugees are subjects constantly debated in the United States, and Varo’s status as a refugee and her experience during World War II impacted her work and her view of the world deeply.

While researching the artist, Aliaga found out that one of Varo’s pastimes was to look through the phone book and mail letters to strangers. For years, she would send thoughtful handwritten notes out, imagining the lives of these individuals. Not once did she receive a reply.

In “Querida Remedios,” Aliaga finally writes back to her, artist-to-artist, woman-to-woman. As part of the program, audience members will write letters to strangers as well, and on their way out, everyone will receive a random note from one of their fellow viewers. In this way, Varo’s desire to connect everyone lives on.