“Valkyrie Mumbet” by Joana Vasconcelos at MassArt Art Museum celebrates the life of Elizabeth Freeman PHOTO: WILL HOWCROFT, COURTESY THE ARTIST AND THE MASSART ART MUSEUM

Last week, the MassArt Art Museum (MAAM) launched an ongoing celebration of Elizabeth “Mumbet” Freeman, the African American woman who sued for her freedom in 1781 based on the Massachusetts Bill of Rights and won. 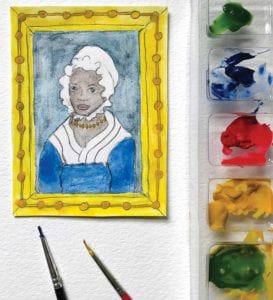 The celebration has been in the works since Massachusetts College of Art and Design opened the museum in February. The inaugural exhibition in the enormous new space is “Valkyrie Mumbet” by Portuguese artist Joana Vasconcelos. Unfortunately, the museum and exhibition were open for only 10 days before COVID-19 concerns forced closure. Vasconcelos makes large-scale fiber sculptures, called Valkyries after Norse war goddesses, in honor of important historical women. They’re made of intricately woven and worked pieces of fabric, embroidery and other textiles, a reference to what has historically been called “women’s work.” When MAAM commissioned a piece, Vasconcelos dug into Massachusetts’ history and found Freeman as a prime candidate to be celebrated.

“Hers was the very first suit that was based on a person’s natural right to freedom and it challenged the constitutionality of slavery,” says Lisa Tung, MAAM’s executive director. “She’s an amazing character in Massachusetts history and American history that we thought should get more attention.” The ruling in Freeman’s case eventually served as precedent for the abolition of slavery in Massachusetts, and yet Freeman is rarely mentioned in the history of the period.

MAAM celebrated the day with art-making events, a reading of the children’s book “Mumbet’s Declaration of Independence” by Gretchen Woelfle, and a conversation between performing artist and playwright Tammy Denease and MAAM curatorial fellow Michaela Blanc about Freeman’s legacy. The book reading will be accessible online for a month; the other programs will be accessible indefinitely.

“Even though it’s a different format, I think it’s still telling interested viewers and our public this really wonderful story,” says Tung. As part of the celebration, MAAM partnered with the Trustees of Reservations, which manages the historic property Ashley House in Sheffield where Freeman was enslaved. A virtual tour of the home and discussion of her life are available online. The property is also open for in-person tours with social distancing and other COVID-19 precautions.

The MAAM programming not only brings the story of Freeman to the forefront, it delves further into her life. Though known for her famous lawsuit, she went on to paid employment with her lawyer. She bought 19 acres of land, owned property, accrued wealth — and most importantly, passed it all down to her descendants.

“During a time when women have very few rights, white or Black women, she then asks Sedgwick [her lawyer] to help her write a will,” says Tung. “She’s one of very few women at that time with a will, that is then giving her home and her possessions to her daughter, grandchildren and great-grandchildren.”

On the web
Learn more about Freeman and explore the programming at
maam.massart.edu

Elizabeth Freeman day is traditionally celebrated on either August 21 or 22, but Tung encourages MAAM visitors to learn about her life year-round. Currently, MAAM is planning to open the museum to MassArt students and faculty in the fall and, if all goes well, transition to welcome the public in 2021. Tung says the “Valkyrie Mumbet” exhibition and the accompanying programming will be extended accordingly.

“We think this is too significant a piece of work to only be open to the public for 10 days,” says Tung. “’Valkyrie Mumbet’ is a symbol of freedom, a symbol of women and how they can transform their own lives.”