Chef Anthony Caldwell: Finding his passion and changing his life 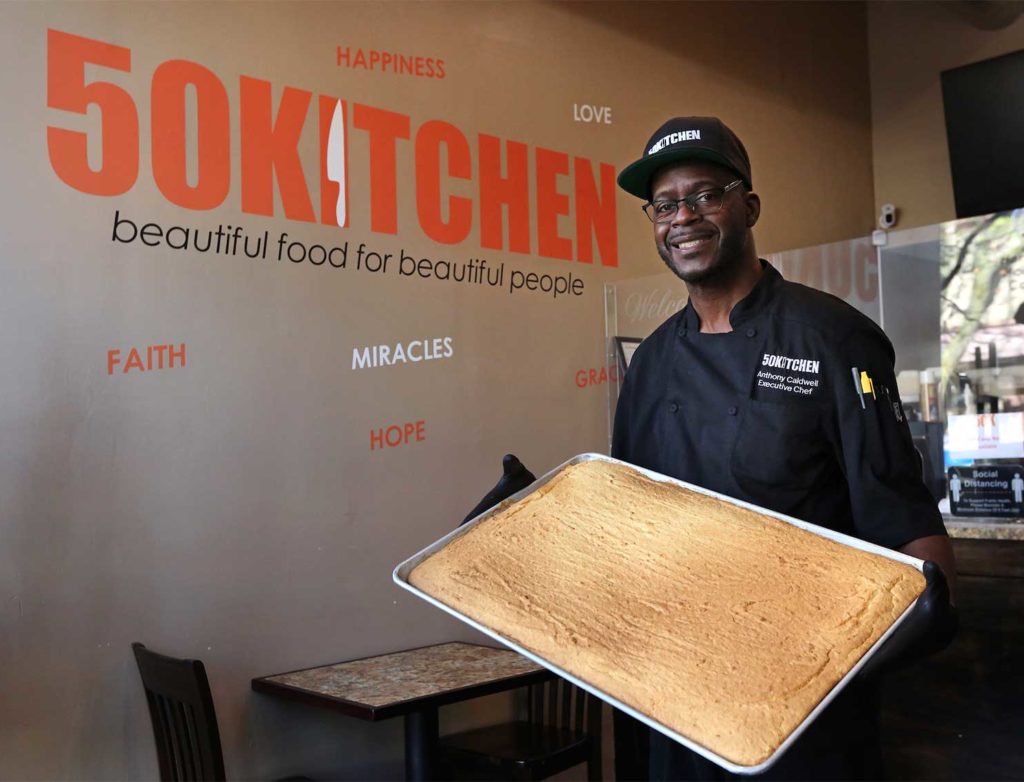 When Chef Anthony Caldwell was doing time in state prison, he never imagined he would one day own a popular Boston restaurant or that he would end up on a nationally televised cooking program with celebrities like Martha Stewart. When he heard about a kitchen job at the correctional center, he was only interested in earning “good time” so that he could go home sooner. But during training with a certified culinary educator, a passion for the art of cooking took hold.

“That man took chopped parsley and sprinkled it on the plate, and it blew me away,” Caldwell recalled. “I said, parsley did all of that to that plate? I was like, ‘Wow.’”

After he was released, Caldwell continued to work his way up in a variety of Boston-area restaurants, but he developed a serious drinking problem and even considered suicide as a way to end his problems. Caldwell decided to return to church.

“Everything I’ve tried thus far has failed,” he said. “Everything but Jesus.”

“So, I’m still drinking, but I’m listening to gospel music and I’m watching YouTube gospel videos, and I’m going to church, and I’m reeking like alcohol in church. But I’m there, right? It’s the process, it’s the journey, right? Rome wasn’t built in a day.”

The name for Caldwell’s restaurant popped into existence one Sunday around 2010, while hanging with friends and making up drunk raps. Caldwell took the mic and blurted out, “I’m 50Kitchen, the boss with the sauce.”

His dream was to start a food truck, with the rationale that $30,000 would be easier to obtain than $300,000. Caldwell started doing private catering and kept his goal in mind even as he continued to drink heavily. One Wednesday night in 2011, Caldwell grasped a Corona in one hand, a shot of Hennessey in the other.

“I’m drinking and I hear this voice say, ‘If you don’t stop drinking, your career is gonna go downhill and you’re gonna die,’” he recalled. “September 25, I said a prayer and asked God to deliver me from alcohol. I haven’t had a drop of alcohol since.”

Not long after, Caldwell said the voice appeared again. “He said, ‘If you stop drinking and live your life, I promise to give you your own kitchen by age 50.’”

After winning a contest to start his own Southern American and Asian fusion restaurant, the Dorchester native opened 50Kitchen in Fields Corner on February 23, 2020. The menu features the merging of cuisines in dishes such as jambalaya egg rolls, and kimchi and collard greens. Shrimp and grits is one of his personal favorites. Caldwell said he struggled to pare down the menu because there is nothing on it that doesn’t sell well. But the restaurant was forced to close just three weeks after it openend, due to the pandemic.

“Even though it was the pandemic, if you don’t succeed with your dream, your ultimate goal in life, you feel like a failure,” he said.

Caldwell reached out to his mentors, who helped him navigate the situation, and the people of Dorchester and the City of Boston began to send checks with notes of support.

“They wrapped their arms around me with a level of love that is indescribable,” Caldwell said.

“It was overwhelming in a great way. You know, the kid from Dorchester that took so much from Dorchester, they love me like nobody’s business. And it felt good because it helped me to realize that I wasn’t a bad person. I just made bad decisions,” he said. “When you know better, you do better.”

He reopened successfully last summer, and now, Caldwell’s journey continues to bring challenges. On May 4, he appeared as a contestant on the Food Network’s “Chopped: Martha Rules.”

“You got Martha Stewart, like, the diva of cooking!” said Caldwell. “Boy, did she come with her own set of rules, some serious curveballs, and a lot of pressure.”

“Chopped” presents contestants with baskets of often unusual ingredients that they can combine with additional pantry supplies to create a dish. Caldwell said he had to prepare an appetizer with bittersweet soda, orange birthday cake, pea tendrils and crab meat. He added chorizo to the crabmeat and some frisée and arugula to the pea tendrils to make a salad.

“I’m looking at this birthday cake and I’m like, what am I gonna do with this cake? I said ‘What the heck,’ I just grabbed a handful, boom, right in the blender.”

Caldwell said he added the bittersweet soda to the cake and apple cider vinegar to make a vinaigrette for the salad.

“Here comes you-know-who,” he recalled. Martha Stewart approached to taste the dressing that he had not yet tried.

Though disappointed he didn’t win, Caldwell said he was still applauded locally.

“So, for the audience in Dorchester, they’re looking at the TV screen. I didn’t get chopped first, I got chopped third. So, everybody’s like, ‘Good job, man. You did good, you made it,’” he said.

The spring season is off to a strong start, he said, with a packed restaurant on Mother’s Day. And his stint on “Chopped” reminded him of important lessons.

“Be calm under pressure,” he said. “Be confident in who you are. Because if you can cook, you can cook.”